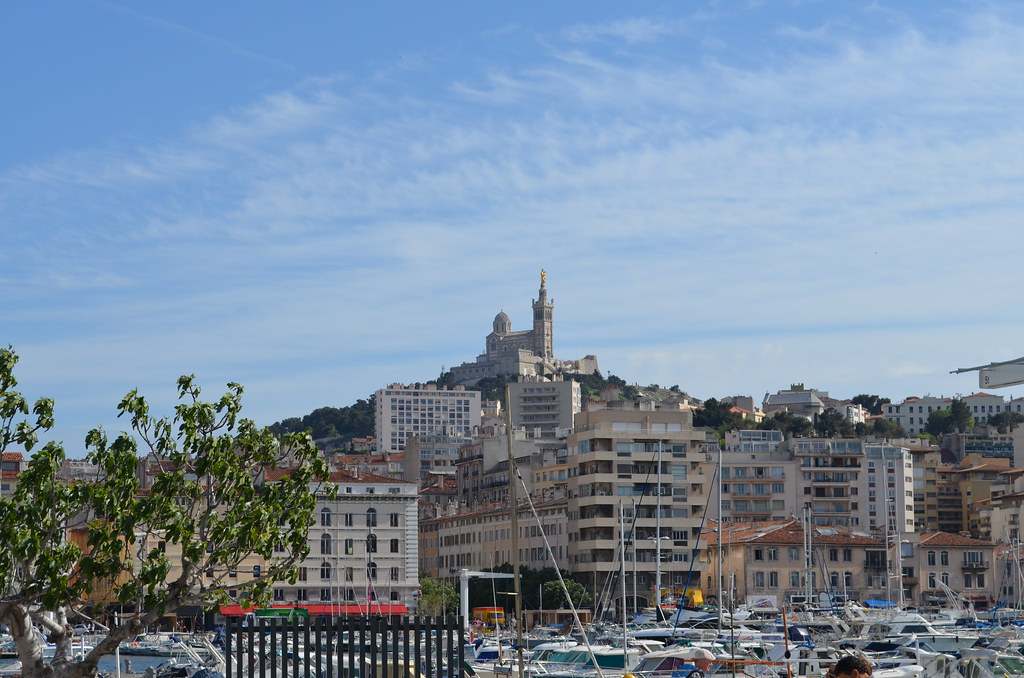 High on a hilltop above Marseille lies a beautiful church. That sentence is so ridiculous that I’m leaving it in the blog post. Ha! Anyhow, it’s true, Notre Dame de la Garde sits high above Marseille on a hilltop. Specifically it sits high above the Vieux Port of Marseille, the ancient port. Given the decorative motif and the maritime history of the city, one has to wonder if the same hilltop played host to a temple of Poseidon in the Greek times, or perhaps Neptune in the Roman. I think you’ll see why in just a moment or two. First, though, let’s talk about getting there. 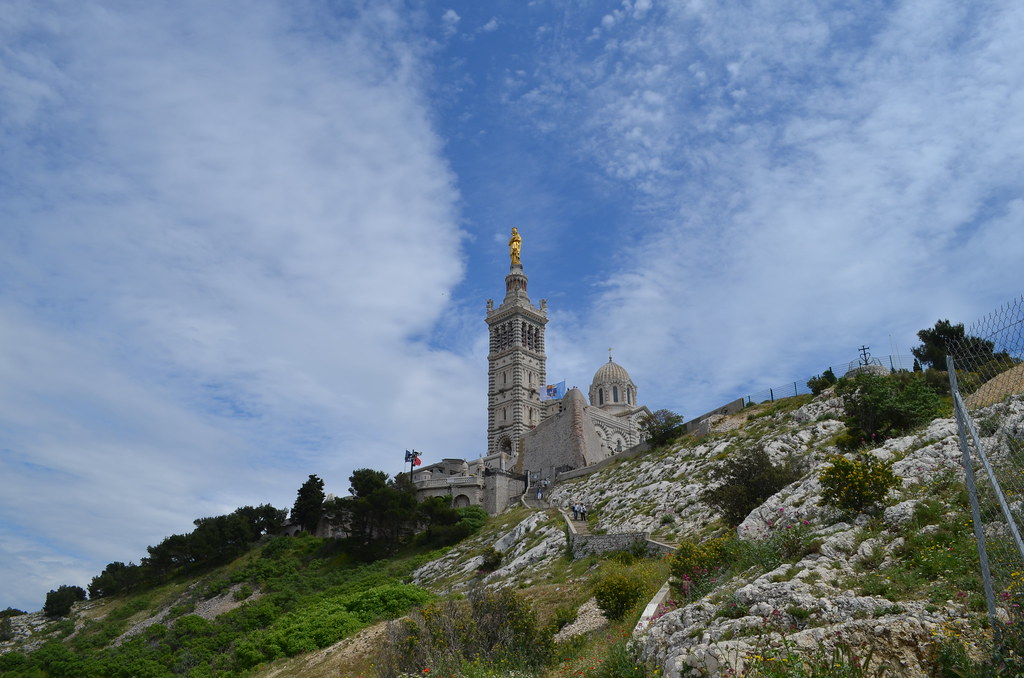 The key direction is UP 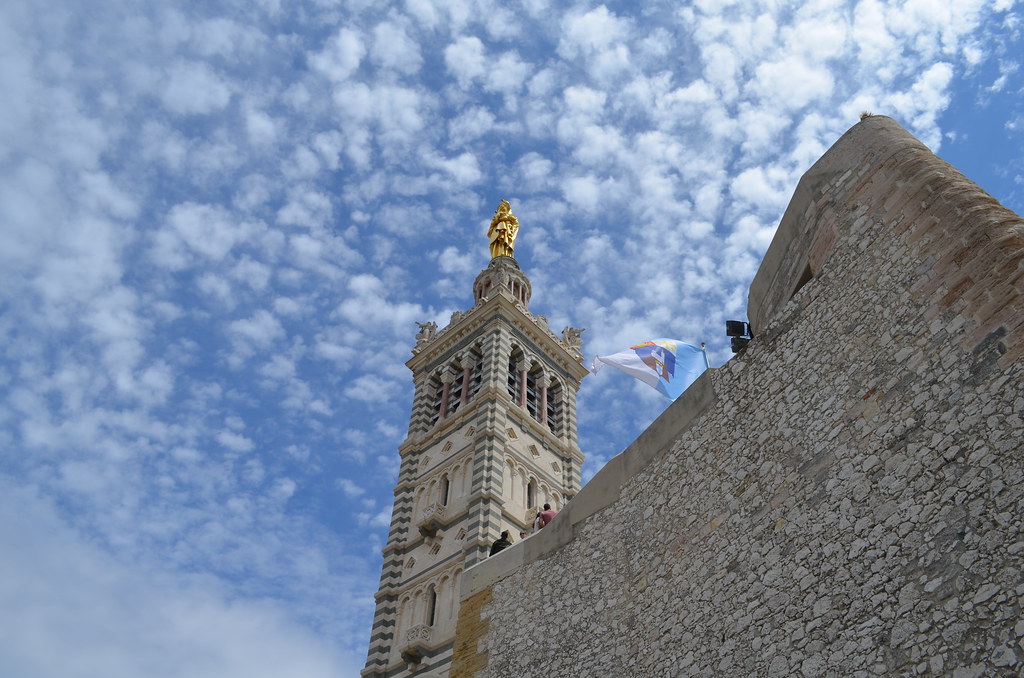 After the long trek up the hill, we didn’t really think there was a better place to start our visit at Notre Dame de la Garde but the bottom. Yeah. We started in the crypt. 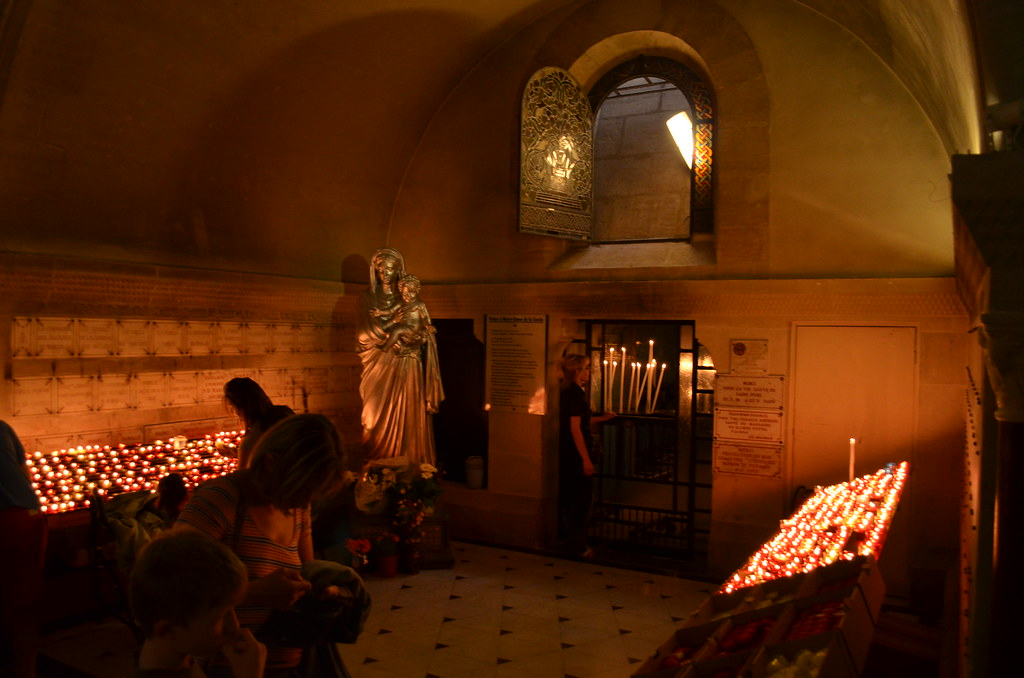 Those candles put off a lot of heat. A different take on fire-and-brimstone.

The crypt was crowded, fairly compact for a church of this size, and full of the living. I thought the heat was being put off by the candles, but it could have also been the accumulation of body heat from the visitors. Certainly not the body heat of the residents I would imagine (yeah, I just said that.) 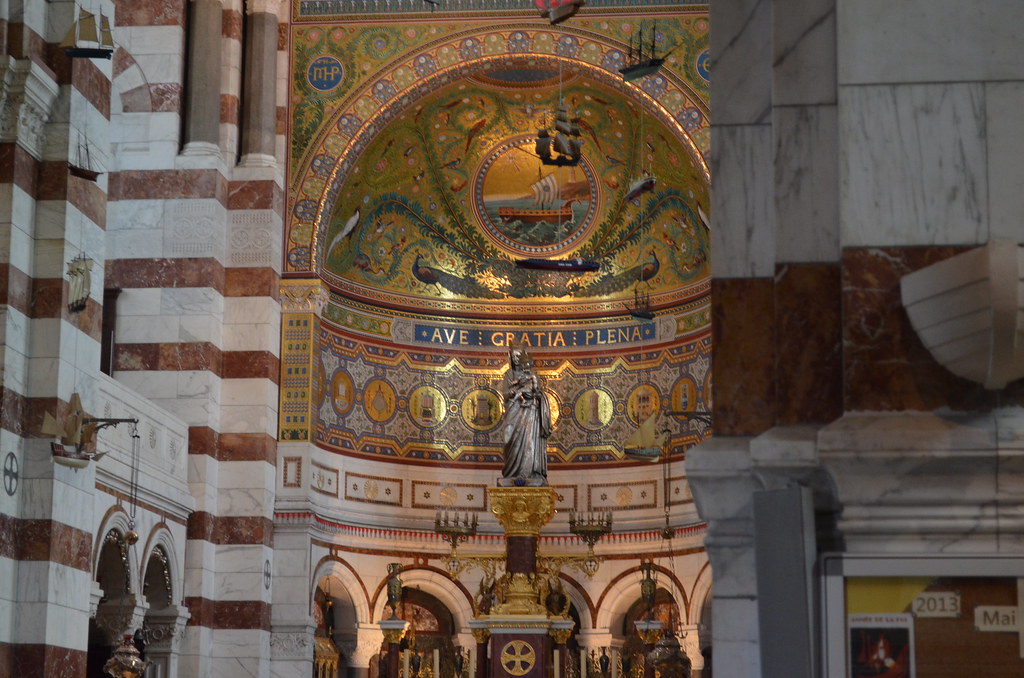 The chancel from the crypt’s exit

After moving up from the crypt to the main level, it becomes obvious very quickly that this basilica is thematic. Thematic in the sense that all of the decoration seems to be nautical. Nautical in the sense that this is a place where sailors and fishermen would worship before heading out to sea. The colors and patterns are not that different from Marseille Cathedral or San Luigi dei Francesi in Rome, but the ships, airplanes, anchors, octopi, and everything else nautical certainly sets it apart. 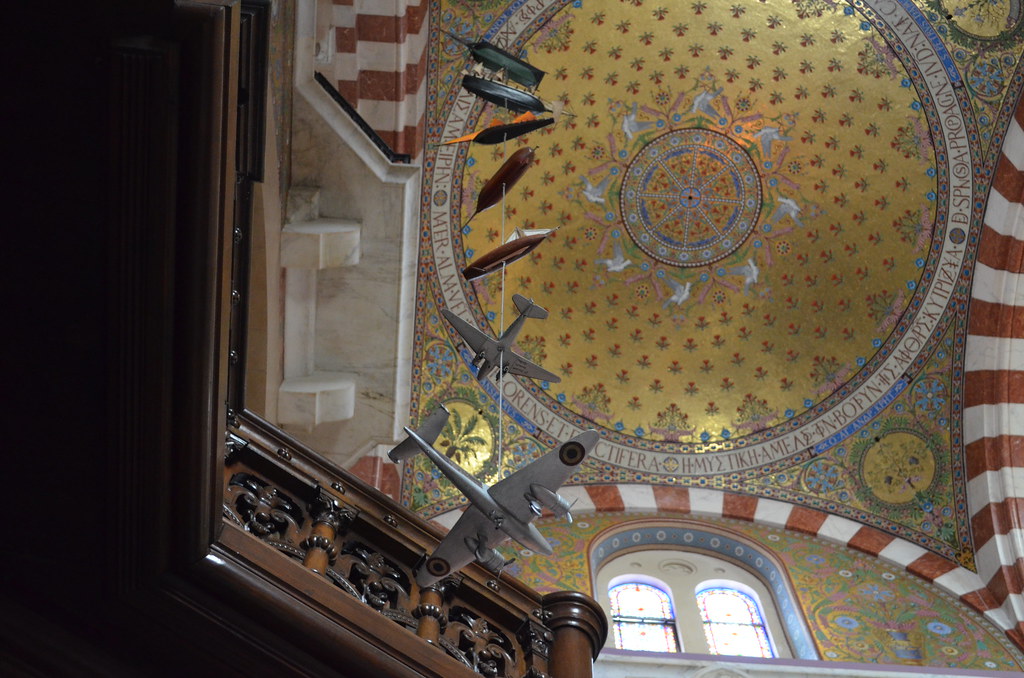 Ships, planes, anything that could move cargo

The church itself is beautiful, and the ships and airplanes and basically all of the artwork are beautifully done, if a bit morbid. There is an entire wall of paintings of maritime and other transportation disasters. Kids getting run over by horse-drawn carts, sinking ships, plane crashes, etc. That’s a bit dark and contrasts in a strong and beautiful way against the otherwise ethereal surroundings. 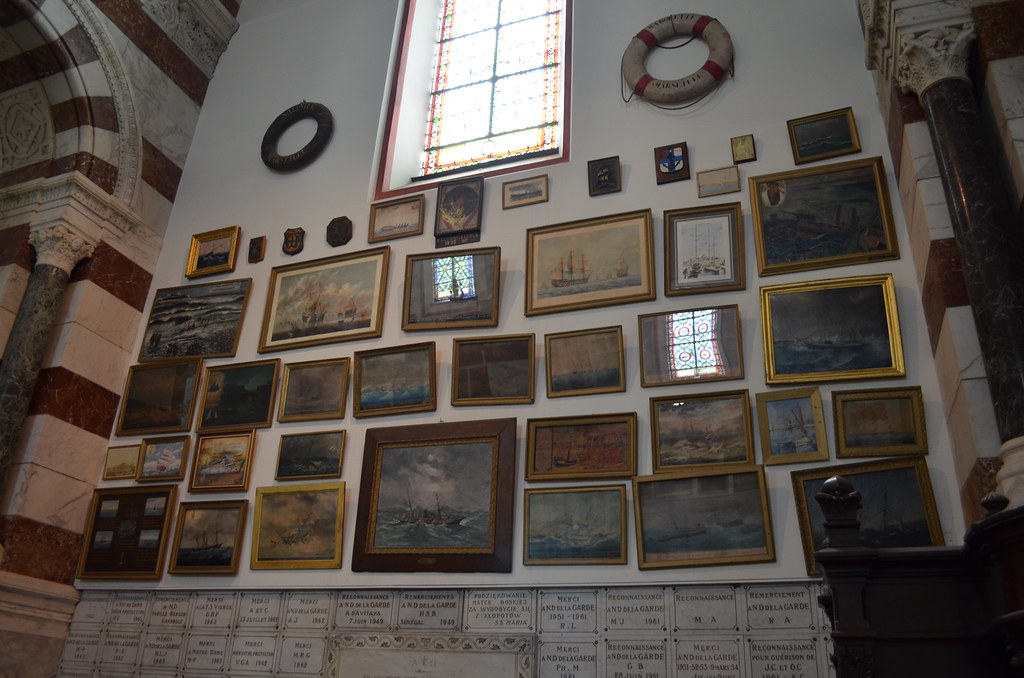 See, I told you. Transportation disasters.

According to Atlas Obscura, the miniatures and paintings are examples of “ex-voto” or rather, appreciations for the help of Notre Dame de la Garde in recovery from accidents, acts of war, or whatever might be depicted in the particular item. In addition to these crafted pieces are also life rings from boats, bandages, crutches, and other items. The site is a pilgrimage destination every Assumption Day (August 15) and people will leave ex-voto items to thank Le Bonne Mere for her assistance in the pilgrimage. 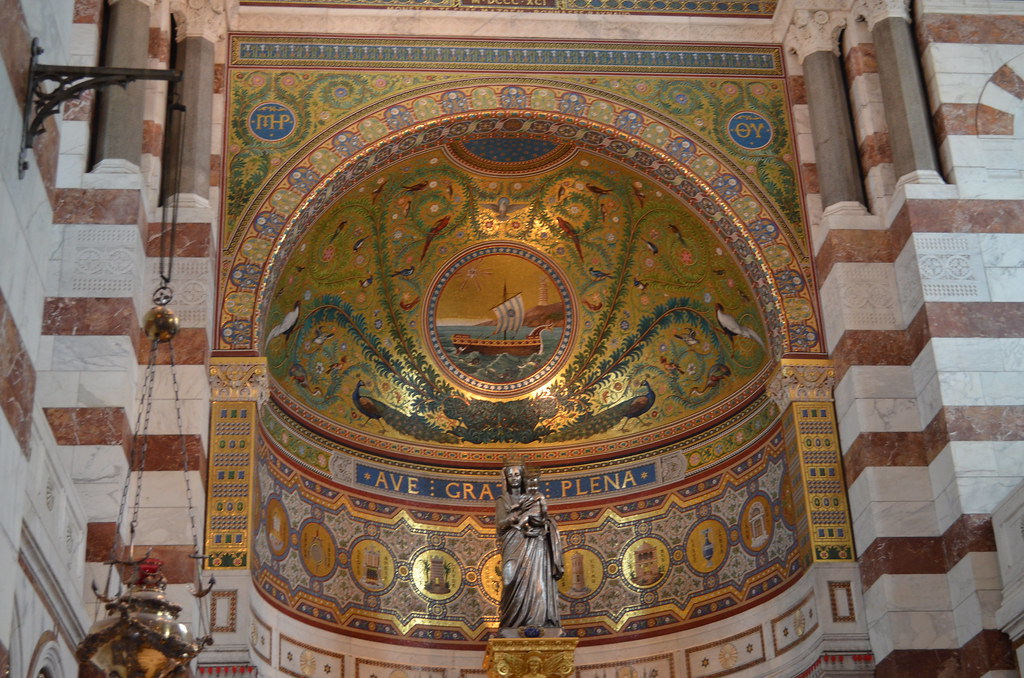 Between the nearly Arabesque gold leaf and repetitive patterns of the decoration, the marble from Florence laid in striated patterns, and its nautical ex-voto, the Basilica of Notre Dame de la Garde is one of the most interesting churches I have ever visited. It’s definitely a treasure that we should all be glad was restored after it’s damage during the French liberation in 1944, and dare I say if I were a sailor in Marseille, this would be a regular stop for peace of mind.

Some things never get old
No fish today 🎣 but this was worth getting out early.
Perfect night for this.
Last few embers of Saturday as I consider how I’m going to catch a big ‘ol fish in the morning (yeah, right).
Back to this ☺️
Disneyland was a total blast. The girls met all of their favorite characters and I’m pretty sure we went on all of the rides we missed a couple years ago. Can’t wait to go back one day! #Disneyland
%d bloggers like this: