The Temple of Artemis has been built in a far away land!

This is the rather frustrating message I often receive one turn before completing the Temple of Artemis whilst playing Civilization (you know, the computer game for nerds!). I never follow up to see who it was, but I always grimace at the amount of wasted turns. I mean I could have had the Colossus of Rhodes or some shit. 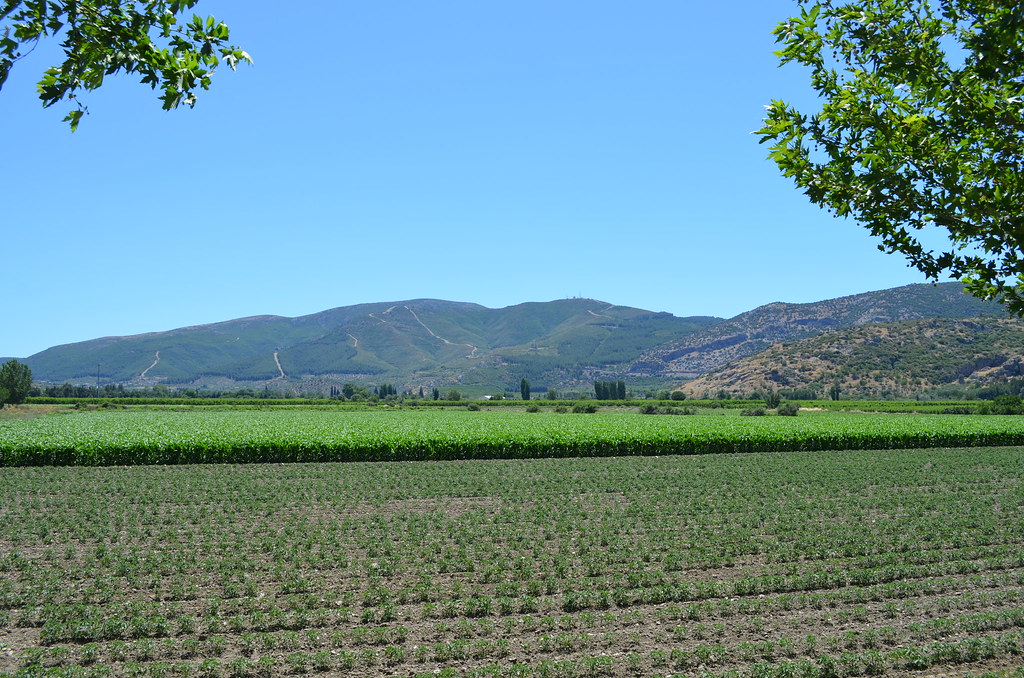 I honestly expected a much more barren landscape

Anyhow, one of the “must see” items we had on our list for our stay in Turkey was to visit the ruins of the old city of Ephesus. Ephesus gets its own post. Enough about Ephesus. Anyhow, we woke up early and took the train from Izmir to Selçuk, had lunch, visited the little tourist information center where we picked up a book with info about ancient Ephesus, and started the 3-5km walk from Selçuk to the ancient city. The book mentioned the Temple of Artemis was on the way, so when we saw the sign (in plain english, BTW “TEMPLE OF ARTEMIS ->”) we took a right and headed down a little embankment towards a pond. 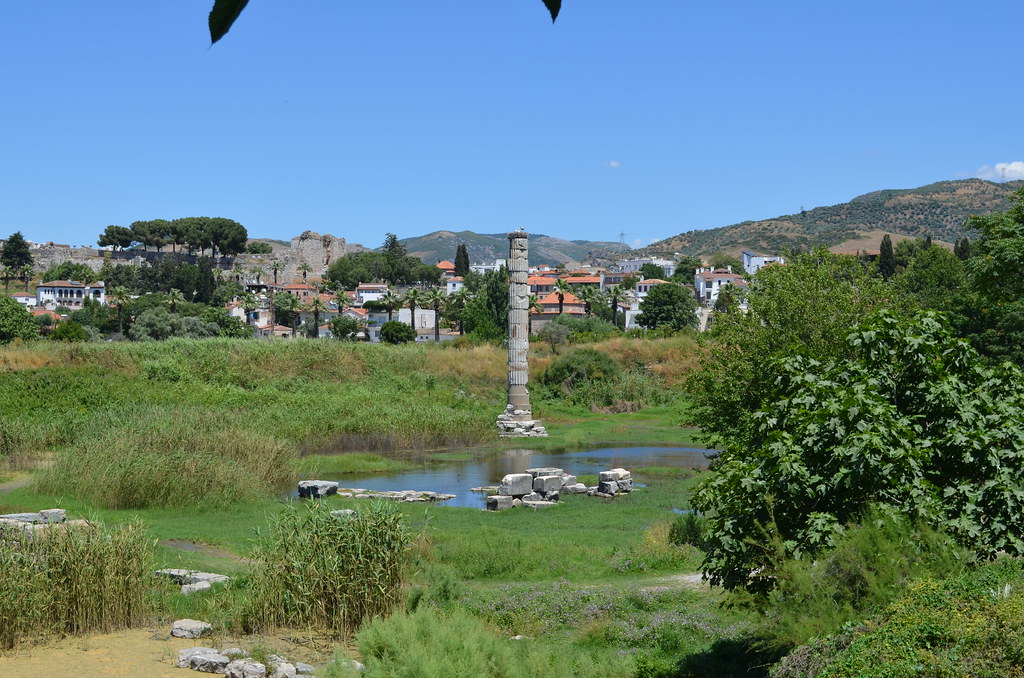 This is where the Temple of Artemis used to be, and where a couple parts of it still are

Standing there, in a kind of worn out, faded, weathered glory, was the one remaining column from the Temple of Artemis. Now, if you’re not familiar with your ancient history and Greek Pantheon, the Temple of Artemis was one of the most grand architectural pieces of the classical era…that is until it burned down. Also Artemis was the goddess of the hunt, who gave us the gift of bows and arrows and protected the woodlands. Or something. 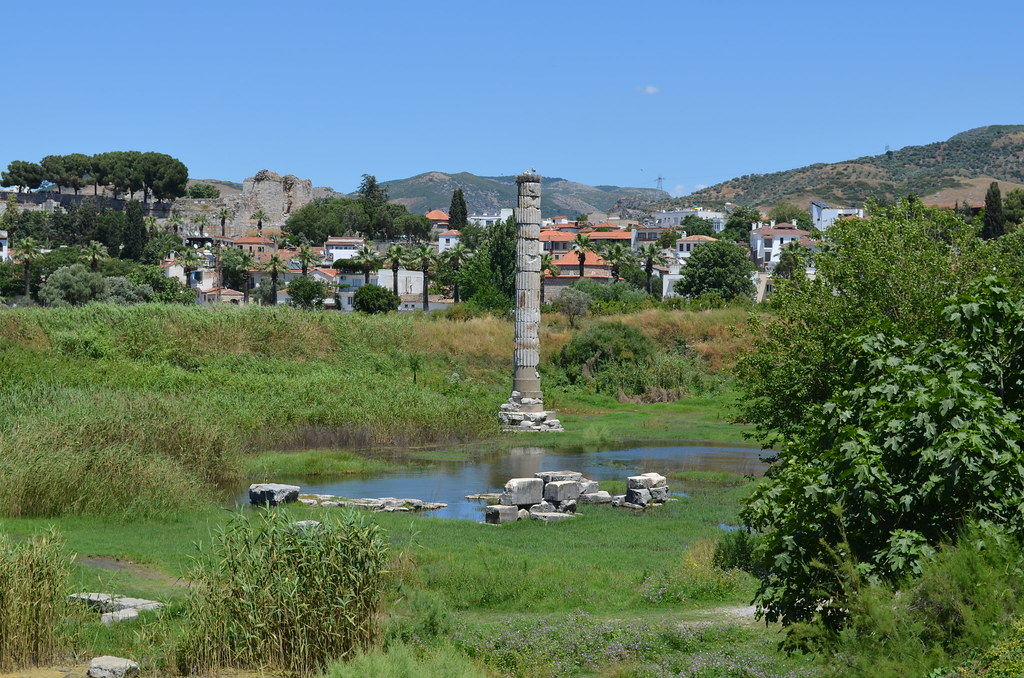 Clearly, there wasn’t much exploring to do, but to see what’s left of a 2,000 year old structure that once dominated the landscape is always a bit of a thrill, and considering that a huge “not quite as ruined” CITY of ruins sits another kilometer down the road. A city that is referenced in ancient Persian, Greek, and Roman literature, as well as the Bible. Well, I think whence surrounded by such archeological riches one really gets an idea of how long humanity has been trucking along. 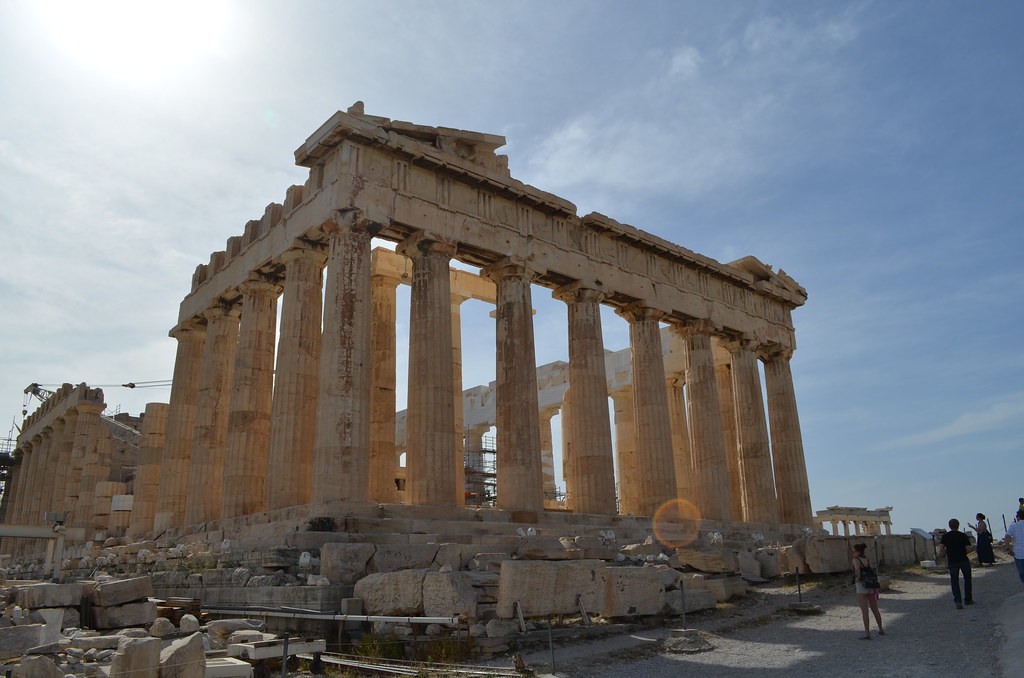 I’ve been avoiding writing about the most iconic and impressive churches I’ve ever visited in my Masterpieces of Light and Space series because I don’t know where to start. I’m pretty sure La Sagrada Familia is going to require some serious work because holy cow that’s an amazing church, and St. Peter’s Basilica in the Vatican? That’s going to require multiple parts. That said, I also think there’s some degree of trepidation with which I approach those pieces because I’ve built it up internally. 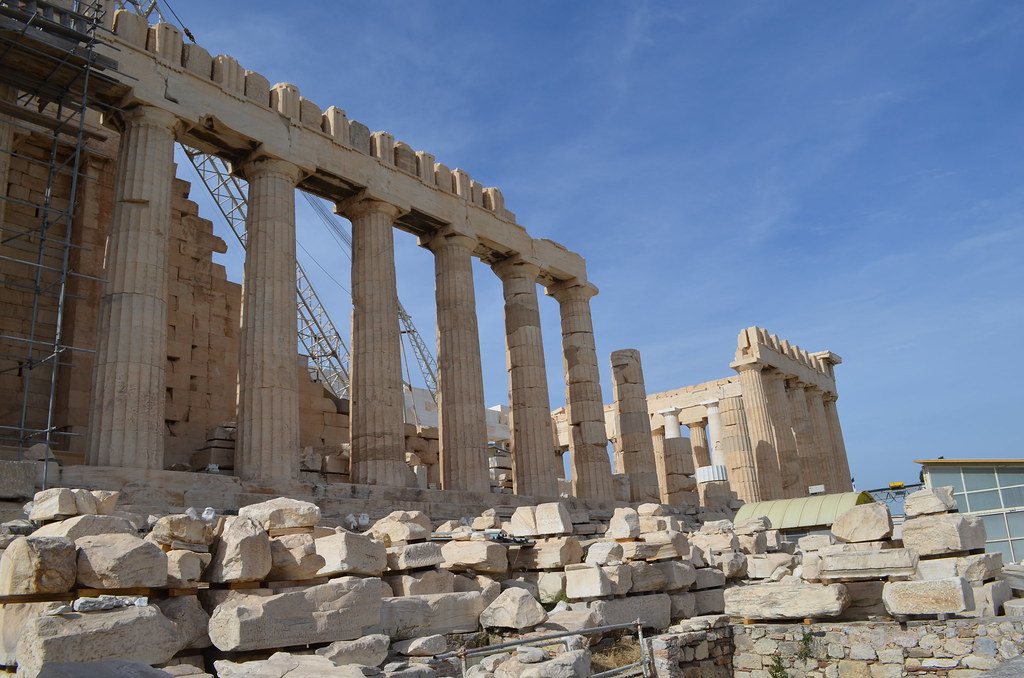 For this series I’m starting out by going for the throat, going for the one most iconic and wonderful ancient ruin that anyone could write about. The one on textbook covers, coins, refrigerator magnets, and a plot of land at Vanderbilt University. You know, THE PARTHENON. 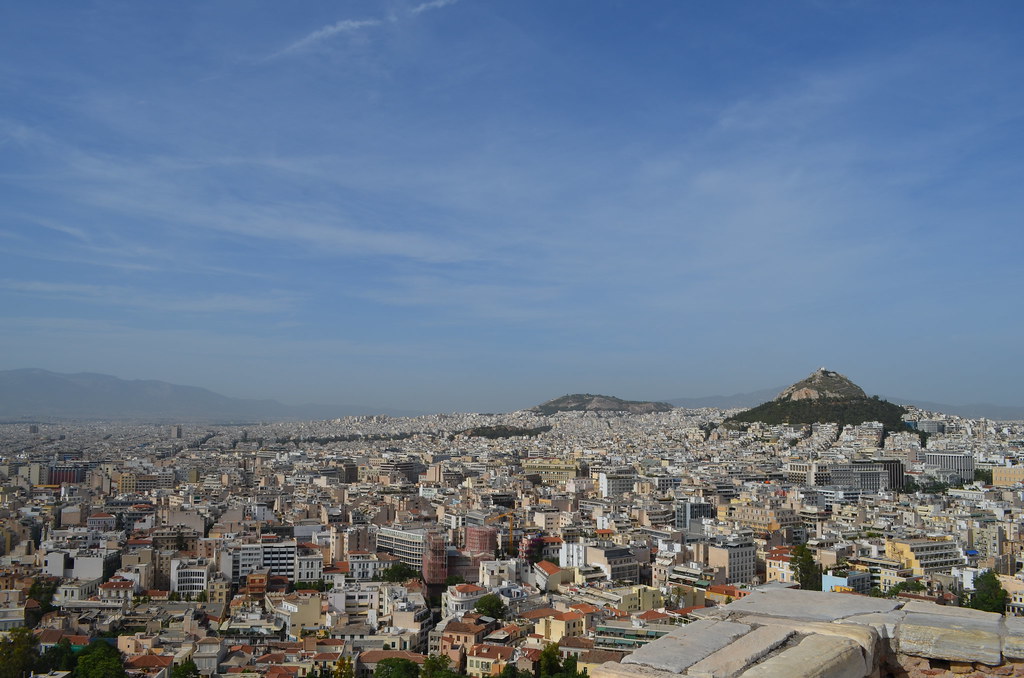 High, high, HIGH above Athens (which is a rather low-lying city that sprawls and sprawls) on the top of a hill reinforced by the most epic stone walls you’ve ever seen sits, among other ruins, the Parthenon. Originally, the Parthenon was a temple to Athena Parthenos, who you probably know more simply as Athena – the patron goddess of Athens. Blah blah blah, the Greek empire fell, blah blah blah, Rome, blah blah blah, the Turks invaded, BOOM, the temple was destroyed. And it’s remained that way for the better part of a millennium. 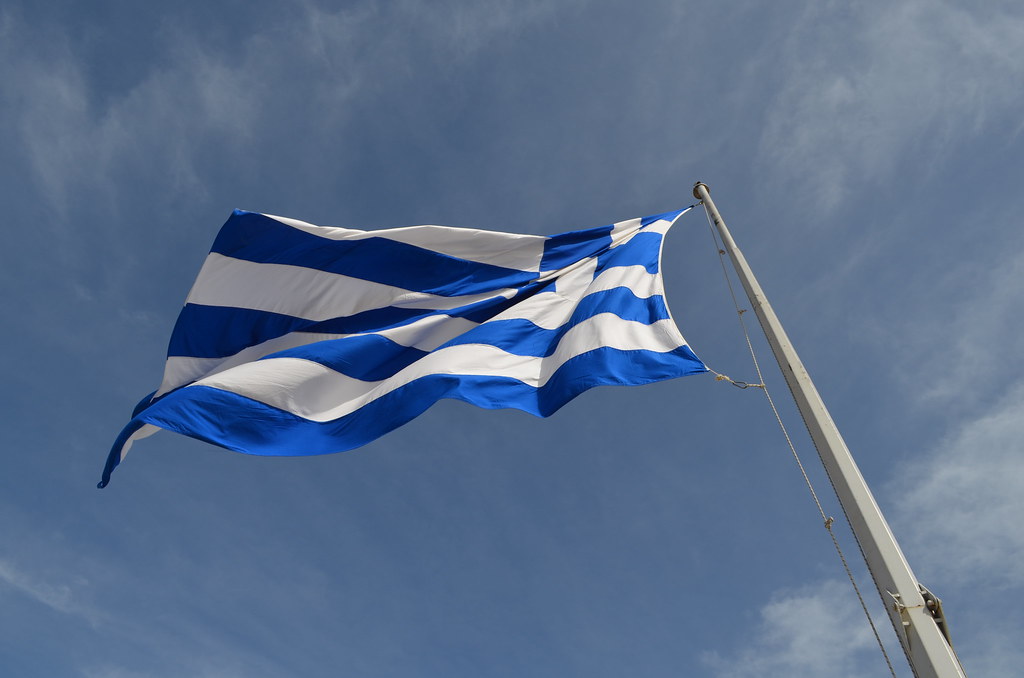 At the top of the acropolis, above the heat of the city below, there’s not much to hear but the wind, and when the wind blows through the columns of the Parthenon and other buildings that have been perched up there for thousands of years it’s kind of hard not to imagine that it probably sounded pretty similar when there weren’t cars and busses down on the surface or airplanes flying overhead. The city’s white buildings probably gleamed in the sun about the same. They say Rome is the Eternal City, but Athens was here first and from the Acropolis you can get a little glimpse back into what it must have been like so long ago. 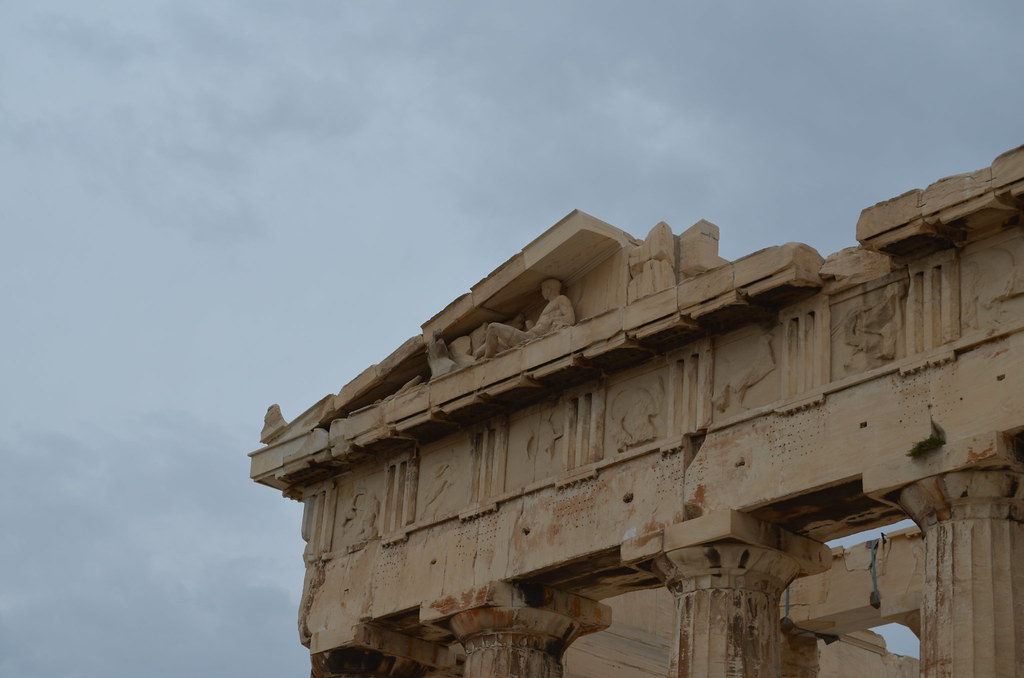 Unlike the temple of Hephaestus just down the hill, most of the relief carvings on the Parthenon are no longer in place, but rather now are located in the British Museum. Talk about history stripped down to the bone, right? The good news is that means the carvings are at the very least preserved in a safe place.

From a practical standpoint, I should probably point out that when you buy your Acropolis tickets they include admission to many different sites, and that the Parthenon is one of the ones that closes the latest, so you may consider making it one of the final stops of your tour through Athens. Also it’s a heck of a walk up to the top, and likewise a heck of a walk back down. And it’s hot. And the marble is slippery, so good shoes are probably a better plan than the flip flops I wore.

As I write this, I feel like I don’t have quite the right words or maybe the capacity to capture my love for Greece without sounding like a 20-something traveling for the first time having all sorts of self-realizations about how amazing life is and you should travel alone and blah blah blah. I loved every minute of it. I want to go back. The end. 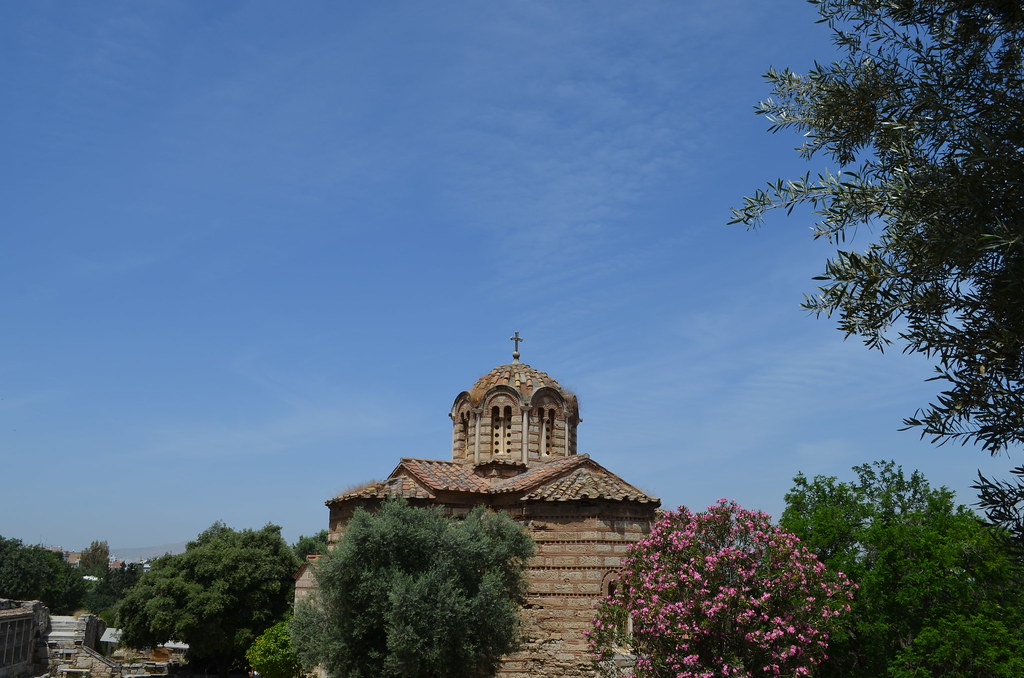 This old church stands on the ancient agora in Athens,  Greece; a beautiful little byzantine Chapel that has stood on this spot for basically forever (that is such an exaggeration but whatevs.) The Church of the Holy Apostles is in such an interesting spot. It’s literally in sight of the Parthenon, you know, the ancient temple dedicated to Athena Parthenos, daughter of Zeus. 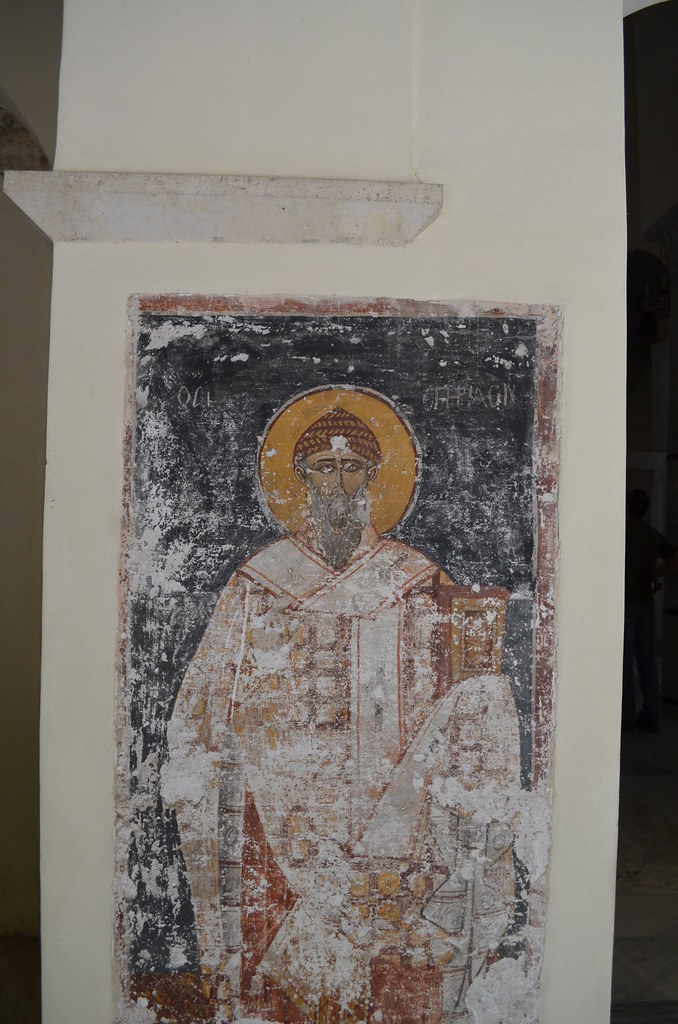 One of the Apostles, I’m guessing Matthew, Mark, John, or Luke.

One particular type of art I was really looking forward to seeing on our trip through the Mediterranean is mosaic. The images used in these old churches were heavily stylized so as not to be “graven” images or idols of false-worship and whatnot. I find the aesthetic really pleasing to the eye. I’d seen art like this in the Metropolitan Museum of Art in New York, but never “in the wild.” 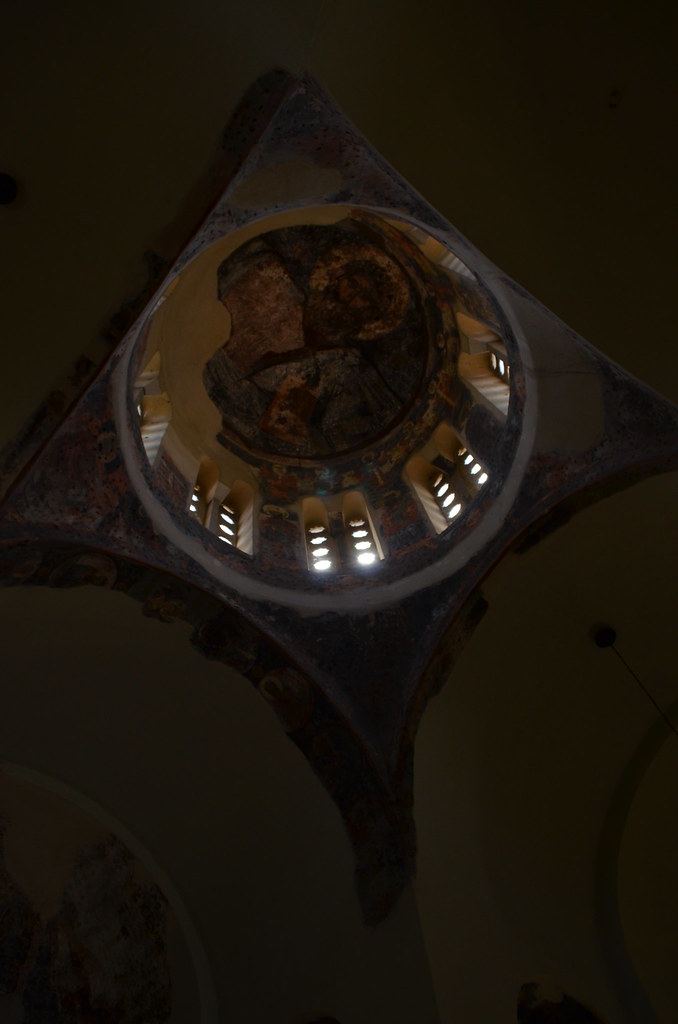 I think the image above is a good reason for the “Masterpieces of Light and Space” title. The whole point of sacred places is to make you feel that there is a greater presence, and the best architects over the millennia have been able to do that through the use of negative space and light. 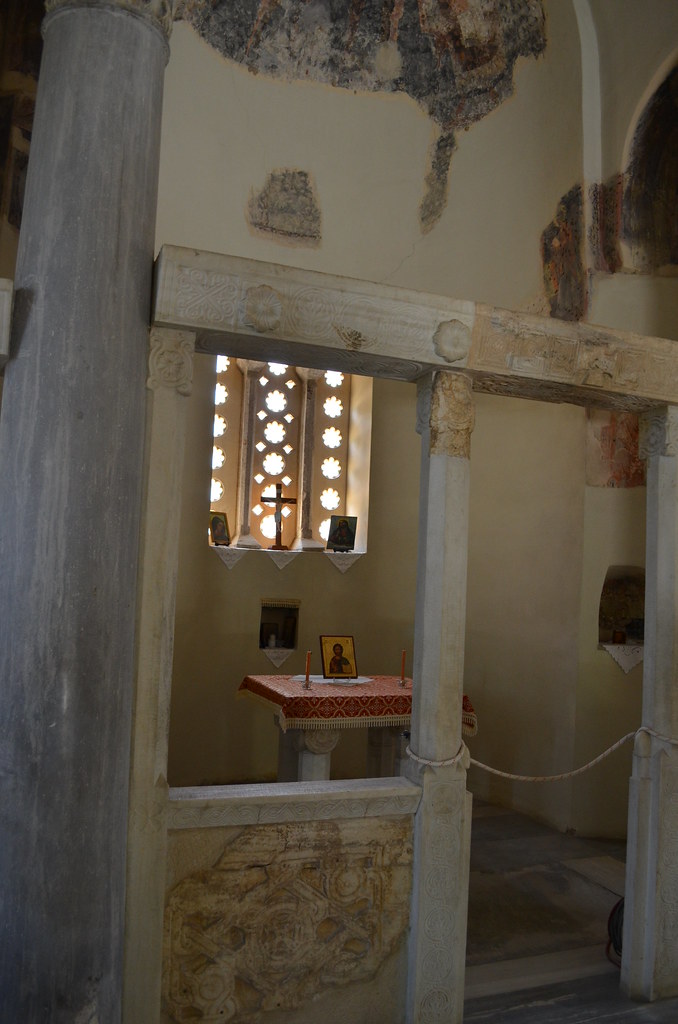 Church aside, something about this image captures the charm of Greece in general for me. Perhaps because some of my best memories of traveling through that beautiful country involve sitting in simple chairs at simple tables. 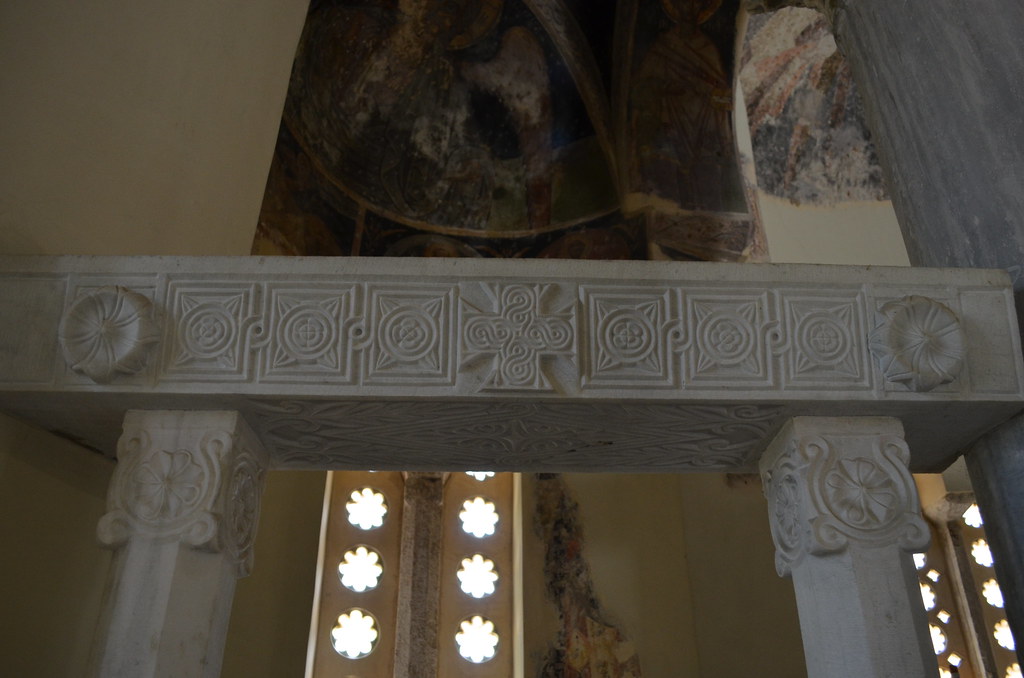 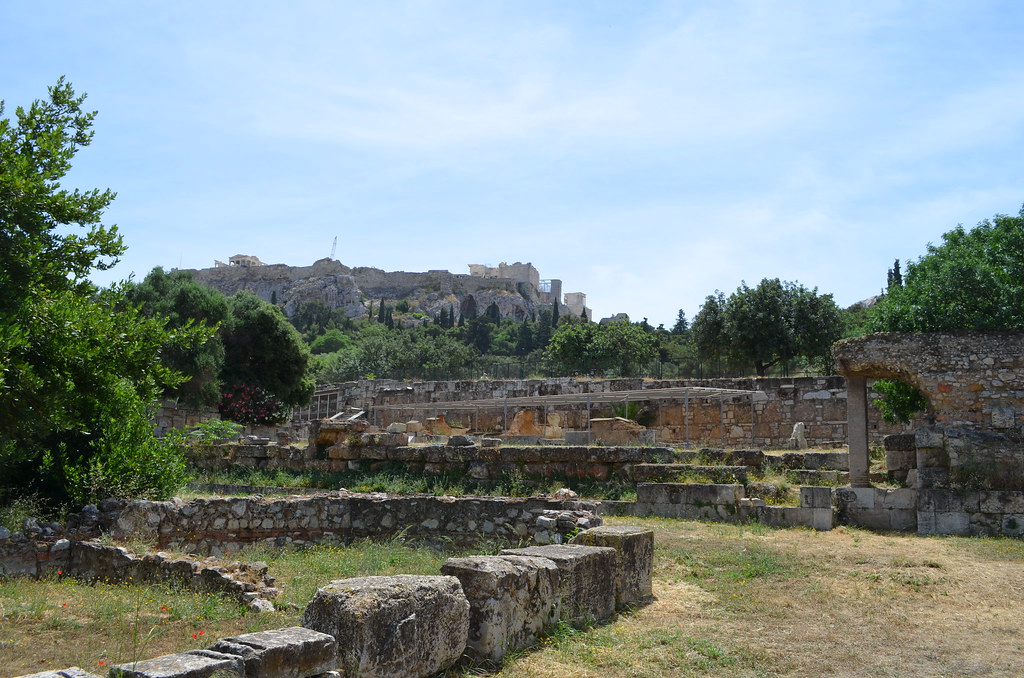 Just outside the door of the shrine, high up on a bluff, is the defining characteristic of Athens – the acropolis. Isn’t it wonderful that you can see the visages of the old gods from the doorstep of a current one? To see the similarities in style that transcend religion altogether and join a past epoch to ours? The answer is yes. Neener neener.

It was a rough spring and summer for weather here in South Texas. In April we had perhaps the most damaging storm my city has ever scene. Cars and houses looked as if they had been sprayed by machine guns after millions of baseball-sized chunks of ice fell out of the sky in a span of about 20 minutes. We got through that okay, but boy oh boy did it freak the dogs out. Okay, so what the hell does this have to do with ancient places? Good question! You see, I have things I want to write about but sometimes I can’t think of a title. A good title is very important to me, especially when writing a series.

At any rate. We were keeping up with Nextdoor pretty well at that point, and during a storm some time after the big one, we saw a post about a lost dog that showed up in someone’s garage. It just said FOUND DOG, HE SCARED. So anyway, the title of this series simply pokes fun at the ommission of the verb to be, a grammatical practice that makes modern user-generated content kinda hilarious.

Explanation aside, I think I’ll just drop some names of places we will be visiting in this series. Athens. Ephesus. Rhodes. Santorini. Kos. Rome. Pompeii. See where I’m going with this?

I look forward to taking this written journey down my memory lane with you, just as we have made it a good way down the road of the Masterpieces of Light and Space series.