Last Christmas I made this yard decoration set out of plywood because my kid loves Mickey Mouse and I love  Christmas. I learned a few things doing this project.

So when we visited Walt Disney World in March of this year, and my kid went nuts about everything I went nuts too. See? I told you so. So when you take a 2 1/2 year old to Disney World, what do you think they would talk about the most? I figured we would mostly talk about Minnie and Mickey (because meeting them was a FREAKING JOY. Like, probably one of the biggest swells of pure joy I’ve seen in my child, ever) after the trip. But really what we talk about most is the stuff from Adventureland. Pirates of the Caribbean is of course worth talking about, but it comes in second to what I think is the most underrated attraction in the park…the animatronic paradise that is THE ENCHANTED TIKI ROOM.

My 2 1/2 year old did not find it scary. She thought the singing birds, statues, flowers, and walls were amazing. She knows the first stanza of the opening number by heart. She makes me sing it to her all. the. time. The Enchanted Tiki Room is probably the no. 1 thing we talk about in general, and will probably be our first stop when we visit Disneyland in September. So of course, when I spied some leftover plywood in the garage and my wife and daughter headed to NYC for a week to visit family, I got busy.

When your kid loves The Enchanted Tiki Room and you want a fancy facade for a tiki torch. #artsandcrafts

My first character to work on is Pele. I found a decent drawing online, printed it, scaled it out to be 4′ tall (so I can deep-root a tiki torch behind her volcano hat in the yard!) Drew her out and got a-cuttin with the jigsaw. It took about 2 hours to cut everything out I’d say. I used ply for the base, then double-thickened the plywood for the brim of her volcano hat. I cut the facial features out of 0.25″ thick poplar and glued them on.

Pele is looking good after a little cleanup and detailing. Need to paint her backside, brace, seal, and find a nice place in the yard for her. #artsandcrafts

A couple weeks later, the wife went out on a Girls’ Night Out and I got to painting. I tried to do a bit of shading to make her seem a little more 3D, but I like the stylized flat with raised feature look so not too much. Then I dry brushed her with black and white to make her look a bit ashy, because you know a volcano-goddess would look ashy. I let the paint dry for a week (because seriously weekdays this stuff doesn’t happen) and did the detail work and a little cleanup. She’s currently facedown in the garage with stakes gluing to her butt so she can stand in the back yard. I’m going to spray her backside with brown paint, then put on about 4 coats of polyurethane to make sure she is waterproof AF. After that I’ll pick a spot, stick a torch in the ground, then put her in front of it so that with forced perspective she’ll really look like a fire goddess. 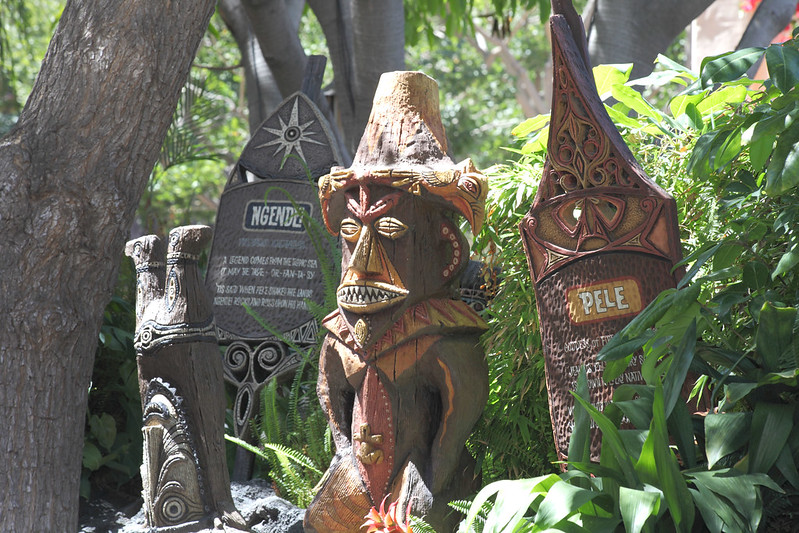 For reference, above is what the “real” one looks like, I think at DisneyLand. I think my backyard version is pretty ok. The new question is where do I start next? I’m thinking Maui and Hina Kulua are going to be combined into a water feature, so probably Rongo. We have a little vegetable container garden he would look good behind.

Anyway, there will be follow ups to this post as the cast of my backyard Adventureland fills out.