Brioche, buttery delicious brioche. The bread that seems to have a perfect use for everything. Good toasted, good plain, divine straight out of the oven. Easy to make, rich, always a crowd pleaser. Except that the first rise goes overnight, and the second rise takes 2-3 friggin hours so unless you’re planning on breakfast at like 10am the point of this joyous bouquet of flours is lost. The last time I made one of these I intended it to be for breakie, but we ended up snacking on it before lunch. But something has changed.

I joined U.S. Masters Swimming and I go to swim practice at 4:45 in the morning Monday through Friday. I took today off. I get home around 6:15 from swim practice and my baby girl wakes up at 9. BRIOCHE FOR BREAKFAST. So last night I made the dough in the mixer. If you have a nice stand mixer, this is a super great dough to make because it really latches onto the dough hook and spanks the inside of the bowl with gratifying thuds. For a LONG time. I think I let it knead for at least 10 minutes. It’s also super fun because once you add the butter the dough dissolves and comes back together as a much looser mass.

If I'm getting up at 4am for a swim, I may as well make sure there's hot and fresh brioche in the oven before my girls have to start their day too!

So after swimming, I walked straight into the kitchen, still in a freezing cold wet bathing suit, and hand kneaded the dough into little balls, set them in a pan, and went about my morning. About 30 minutes  before “go time” for the day I put it in a 375F oven and let it bake. It. Is. Delicious. Love me a brioche.

Also, there is something really cathartic about kneading bread, more so early in the morning. I felt like if this was my occupation I’d be okay with that. Making bread is noble. Bakers fulfill a necessary role in society. I wish I fulfilled such a necessary role. But dollars talk in America and if you want your kid to grow up with tons of opportunities you do what you’ve got to do. Maybe in retirement.

So there’s probably close to a billion historically significant works of art in St. Peter’s Basilica, mostly by Italian renaissance artists who later lent their names to a ragtag group of martial arts knowing turtles. The former (unqualified) art history professor in me wants to show you some of the highlights, but I don’t really know in most cases who made what, nor do I feel like looking it all up on wikipedia and pretending I knew all along.

Unlike my previous posts, my comments about the art will appear above the photo. As if we’re on a tour and I’m speaking before you get a chance to look.

Here’s perhaps the most famous piece, Pieta by one Michaelangelo Buonarroti. 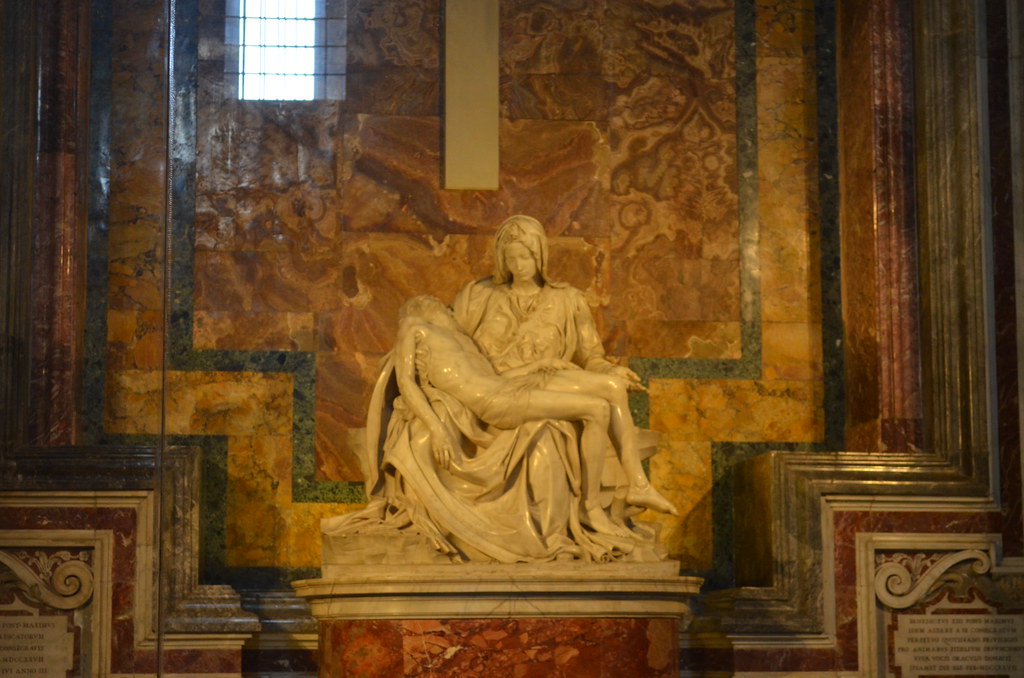 The Baldachino by Bernini… 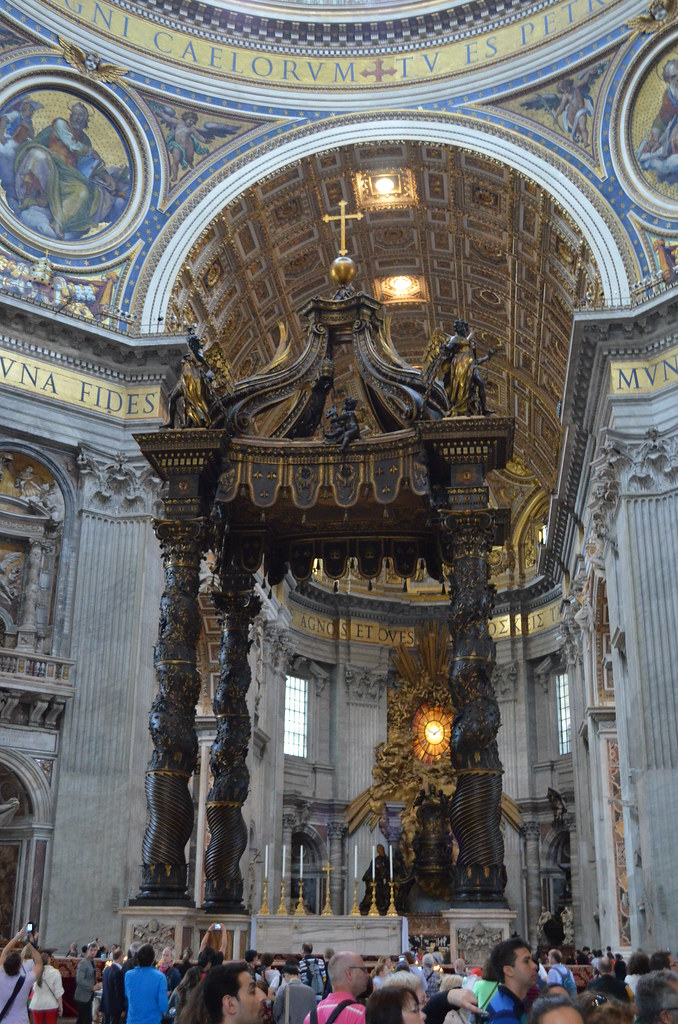 One of the Apostles, who appears to have just hurled something at you. 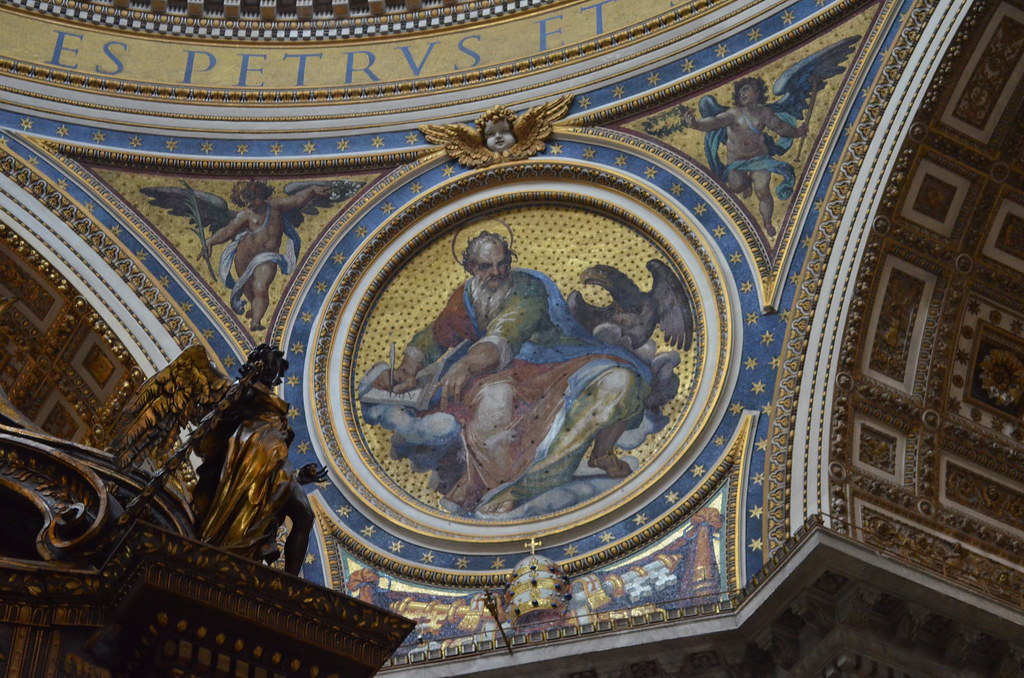 Followed by another Apostle, who perhaps caught what the first had hurled. 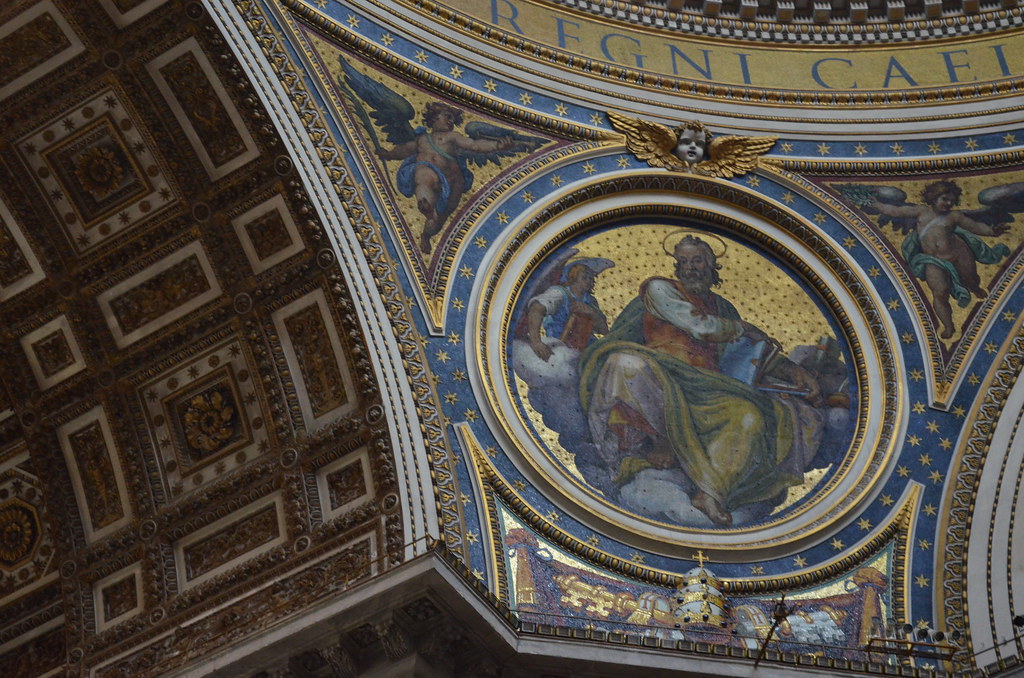 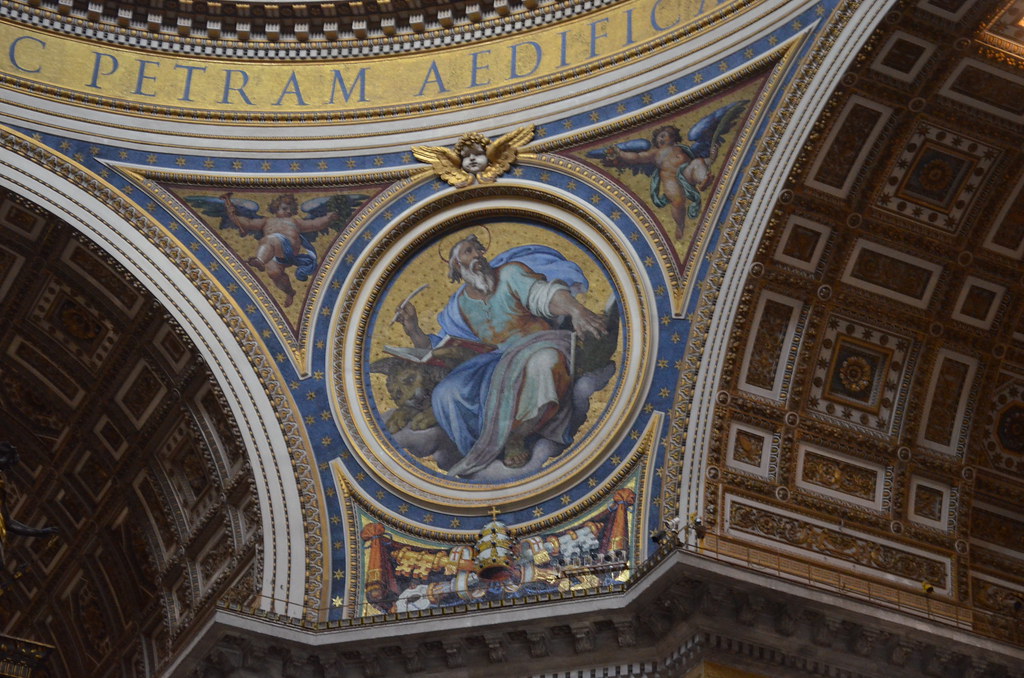 Myriad statues popping their heads out and looking around. It’s like a whole city of the biblically famous frozen in marble… 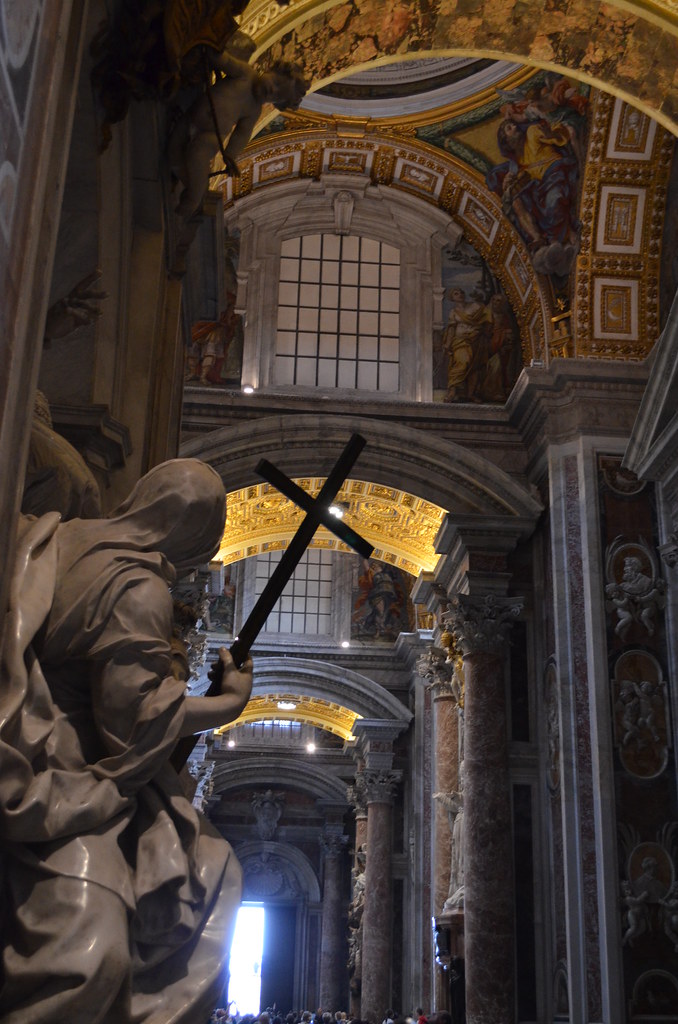 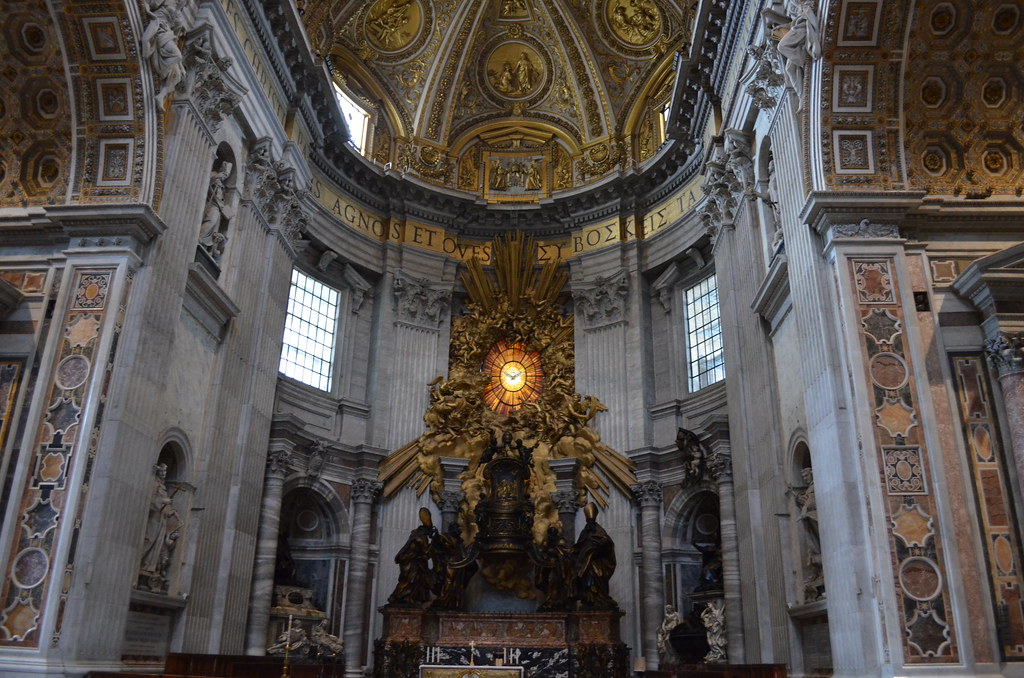 I guess I didn’t get a photo of the fourth apostle at the dome, so we will have to travel back to Rome one day. However, upon exiting St. Peter’s you run headlong into Swiss Guard with their Halberds. Their uniforms are artful AF, aren’t they? 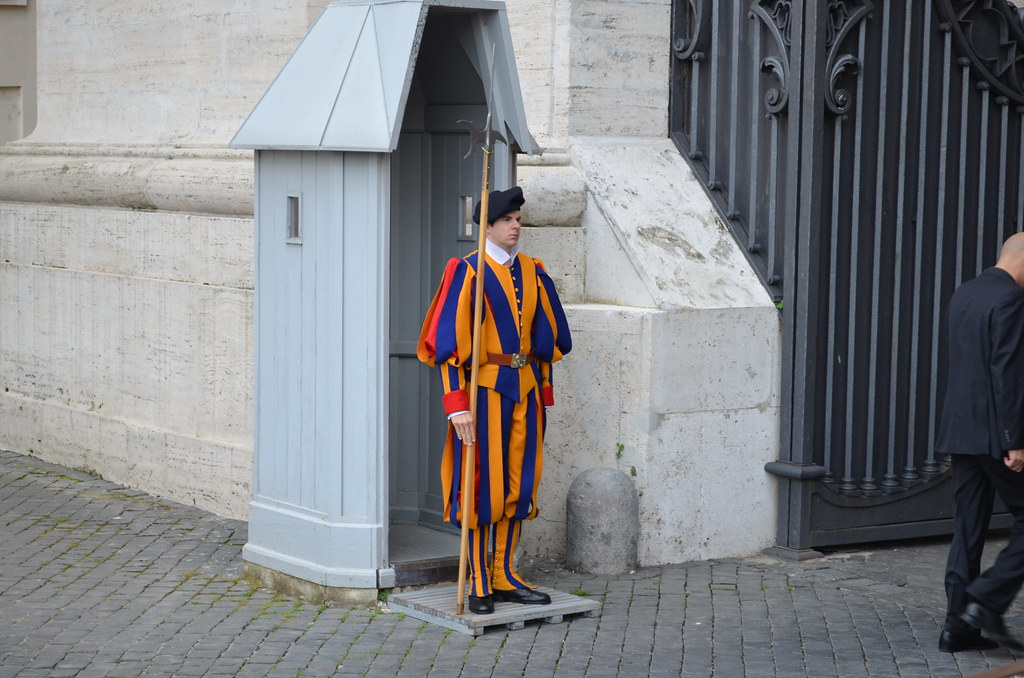 So this will conclude my 4 part series on St. Peter’s Basilica. I think that anyone regardless of faith would enjoy a walk around in this church. There’s literally so much to see. If you attend a mainline Christian church, you will appreciate it from a heritage viewpoint. If not, there are all sorts of curiosities to indulge your brain. Plus the scale is just overwhelming altogether. I’d say St. Peter’s Basilica is not to be missed.

As I’ve mentioned in my posts about the Abbey of St. Victor in Marseille, Barcelona Cathedral, the Basilique de Notre Dame de la Garde, St. Cecilia, just up the river from St. Peter’s and other churches we have visited, one of the things that REALLY fascinates me about Catholic churches is the presence of holy relics. You know, pieces of cloth or bits of wood that touched someone significant from the bible or the sainthood. Or parts of a saint. Really like, patellas and elbows, hands and fingers, etc. Macabre reminders that the history of the church actually happened outside of the confines of a book. Well, St. Peter’s has some breathtaking relics. The ones that stood out to me the most were the relics of so many Popes from years ago. 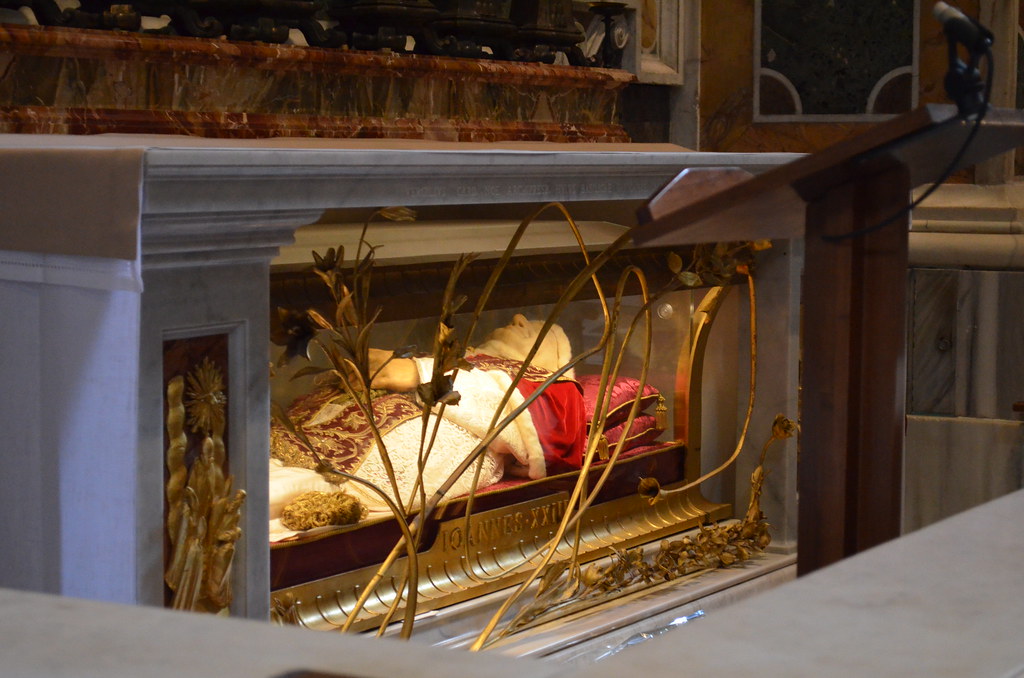 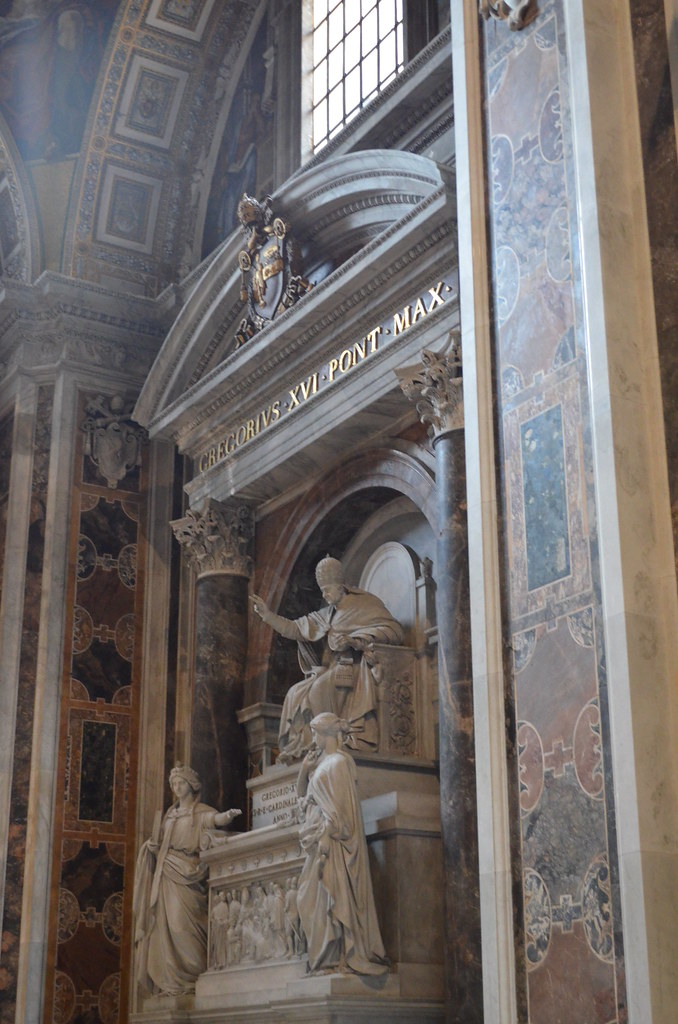 I think Pope Gregory is in that sarcophogus. 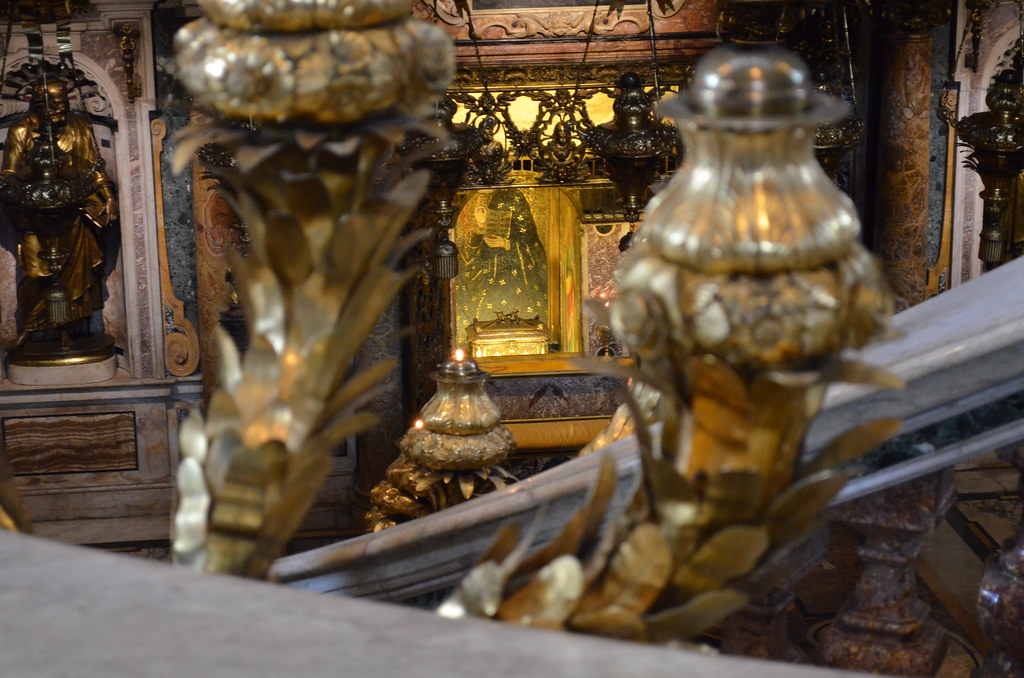 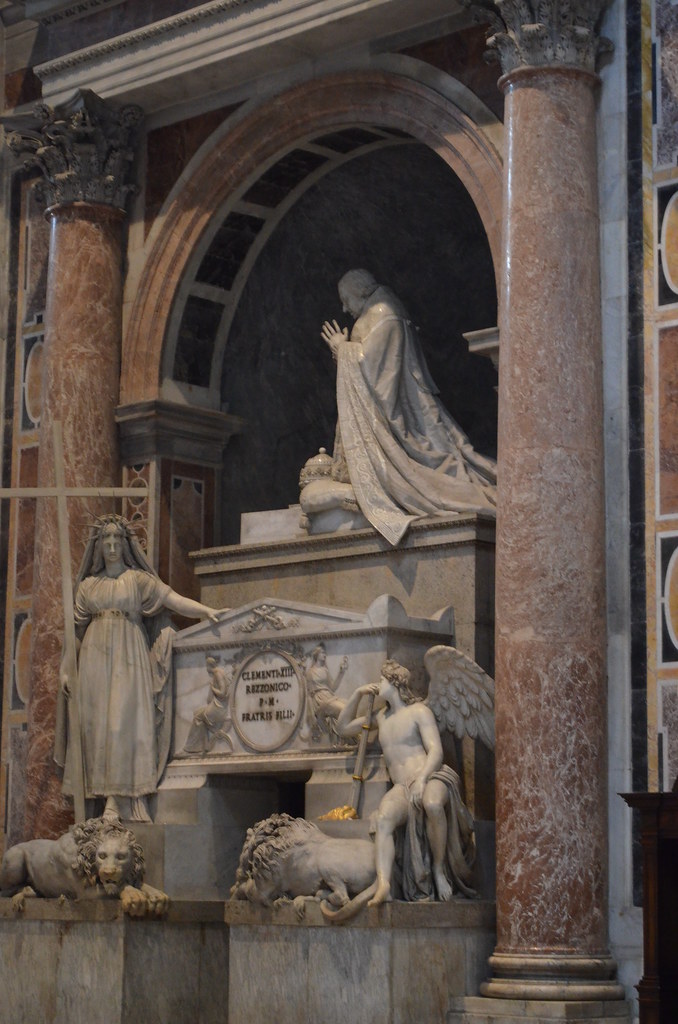 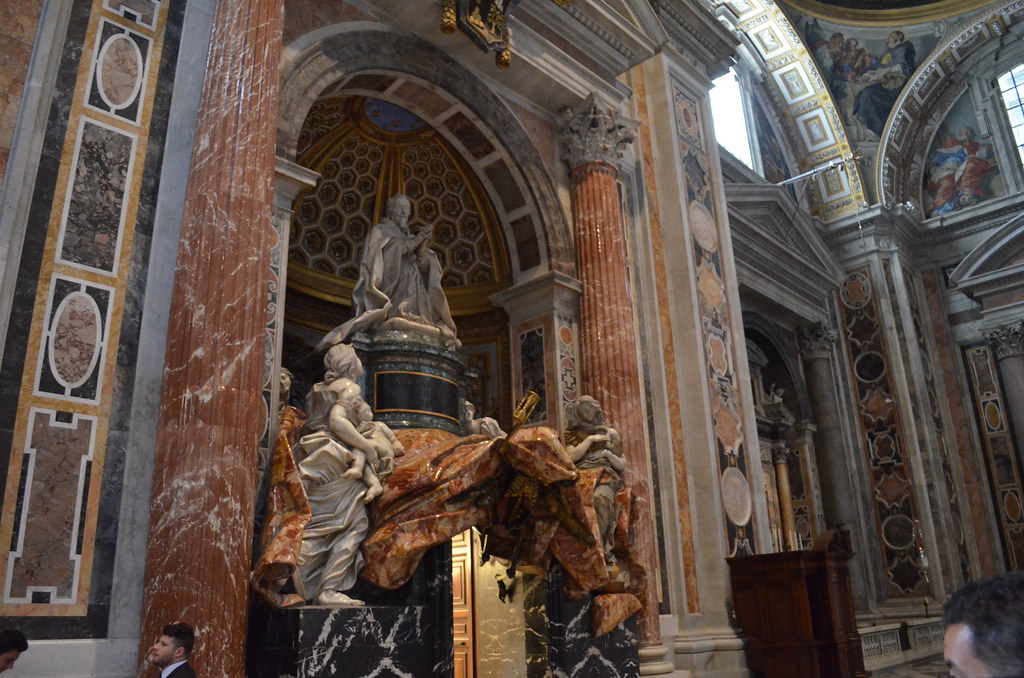 Pope Alexander VI (maybe). Otherwise known as Rodrigo Borgia. He was the Pope in 1492 when Spain sent one Christopher Columbus to the new world. 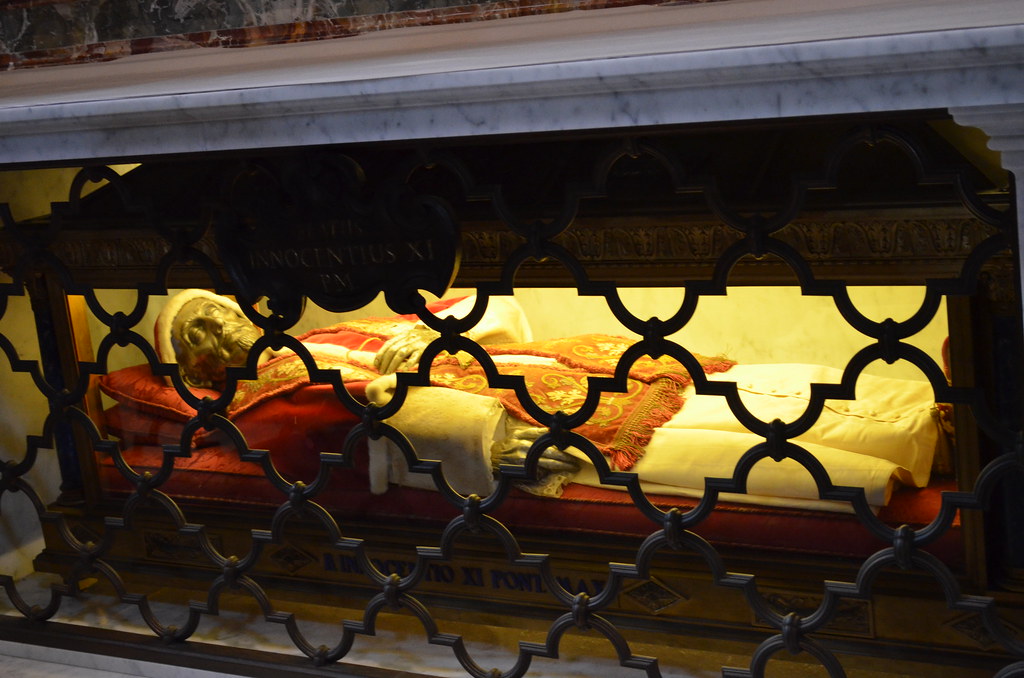 Pope Innocent XI. Cast in pewter it looks like. 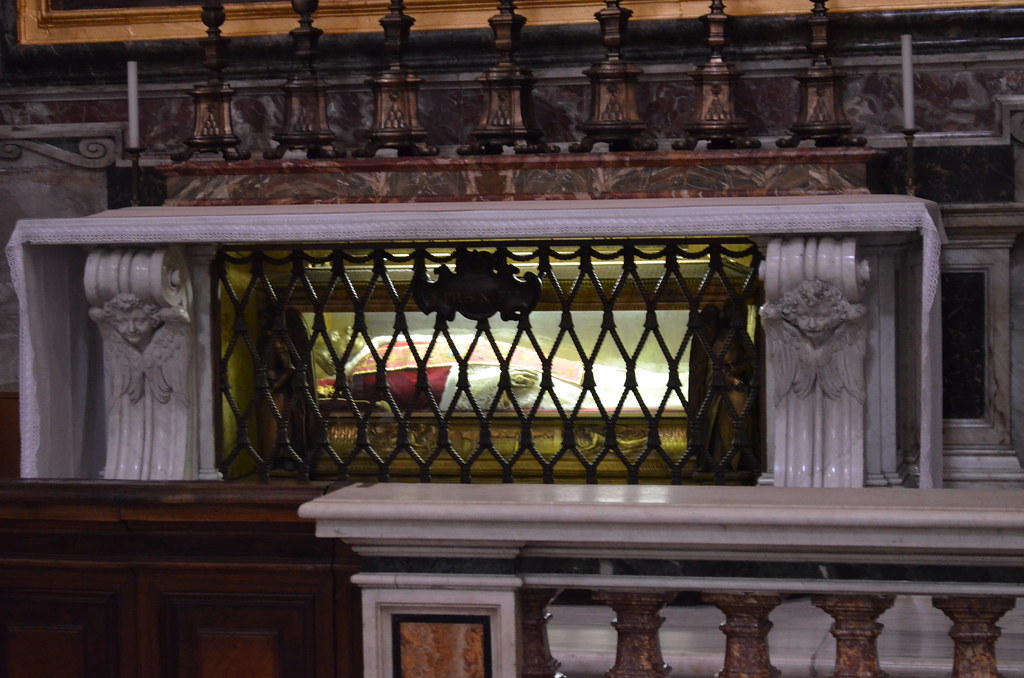 St. Pius X. There’s literally a catholic school a few miles from my house with the same name. But here he is! 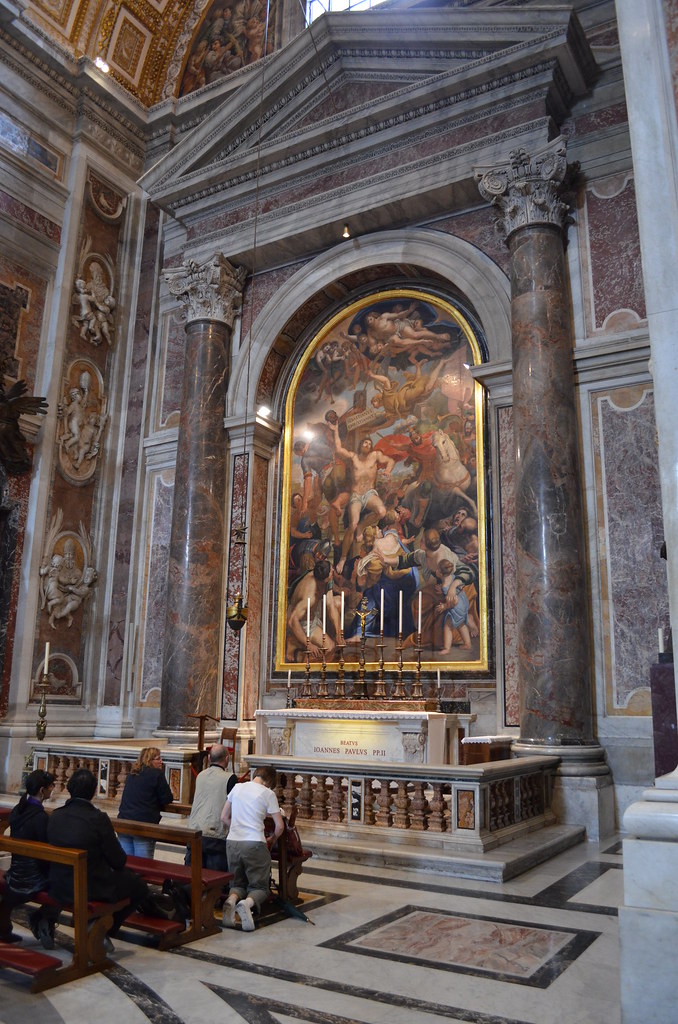 Perhaps the most attended of the papal relics that I observed was this one, and I’m pretty sure I know why. Pope John Paul II was the pope when I was born. He always seemed so kind, so pure of heart, and like he was actually interested in making the world a better place. I had no idea that I would ever get this close to him. Of course, he’s a Saint now, so perhaps these people were asking for him to intercede for them.

So it’s a bit macabre. That’s the only word I can think of to describe how I feel about holy relics like this. I think they do add something to the church. It took me a few minutes in St. Peter’s to realize that these were sarcophagi, not just altars. Once I realized that, I’ll admit I was a little freaked out to be standing in the midst of not just so many spiritual leaders, but world leaders from the time the Papal States were their own nation. It’s absolutely nuts to think that all that separates you from someone as revered as a pope is a few inches of marble.