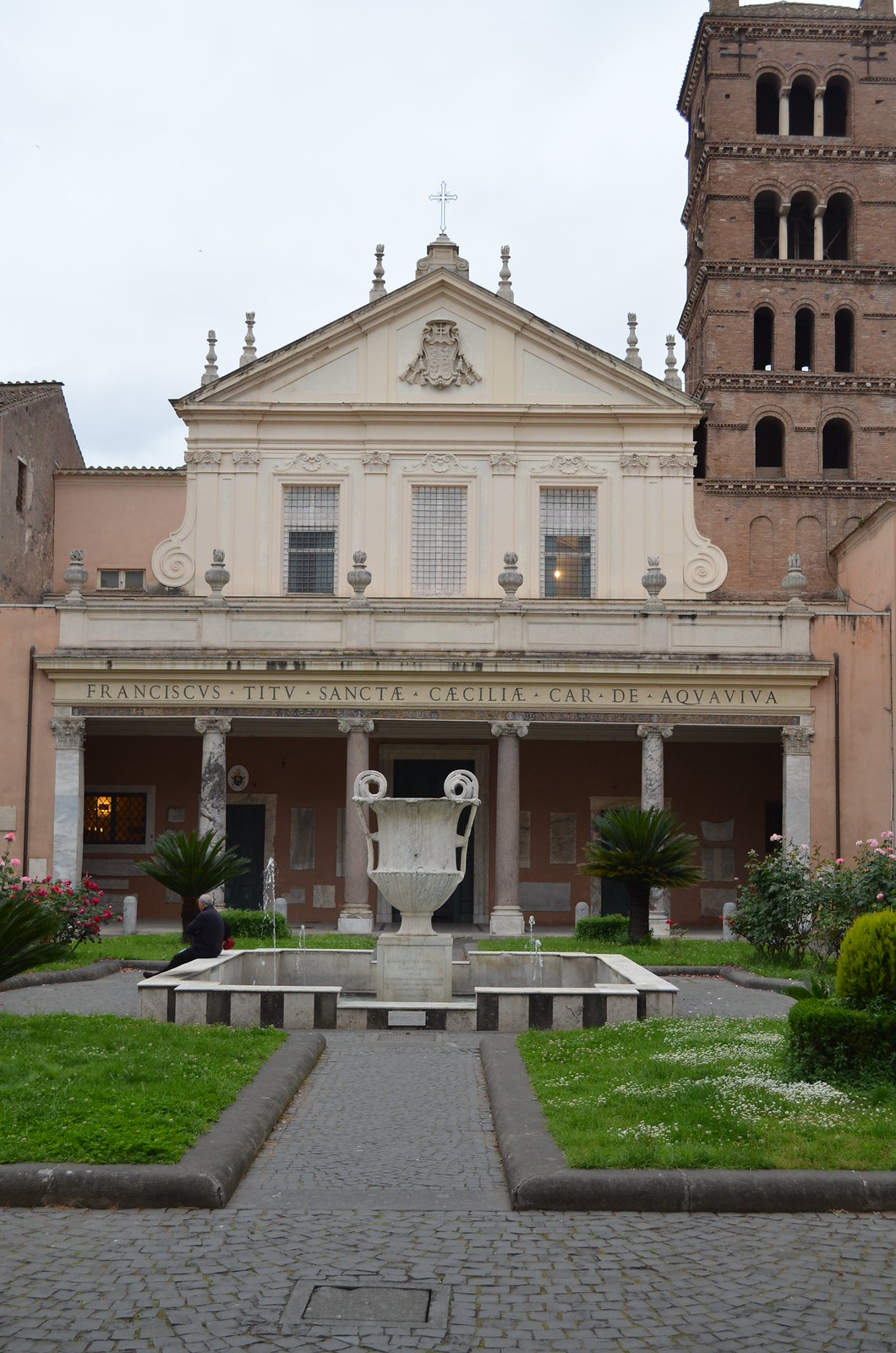 On a warm spring evening in Rome we found ourselves walking around Trastevere, wandering the narrow streets with the feral cats in the afternoon, looking at restaurant menus and trying to follow a map from the old guidebook we got with us to see the church where our niece’s name was chosen. 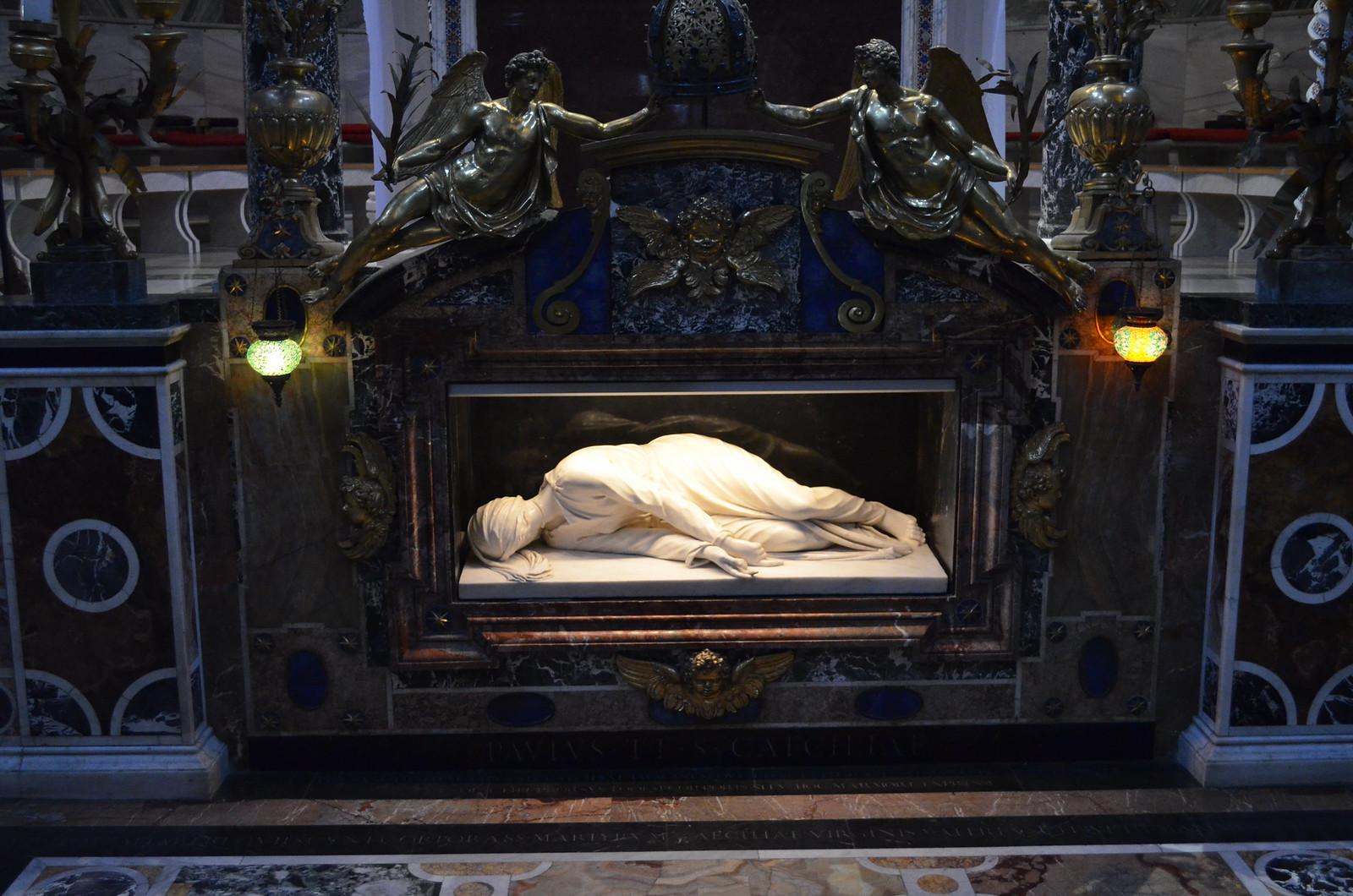 My understanding is that St. Cecilia is the patron saint of music, as she sang until she died during her execution. There is an effigy of St. Cecilia front at center on the chancel at St. Cecilia in Trastevere. It is graphic, showing the cuts on her neck from the sword blows, and her head twisted completely around 180 degrees.The effigy is titled Martyrdom of St. Cecilia by Stefano Maderno, and inscribed in stone at the foot of the statue is his sworn statement that this is how her body appeared exactly in 1599 when she was exhumed. Apparently her flesh was incorruptible – a sure sign of sainthood according to the church. 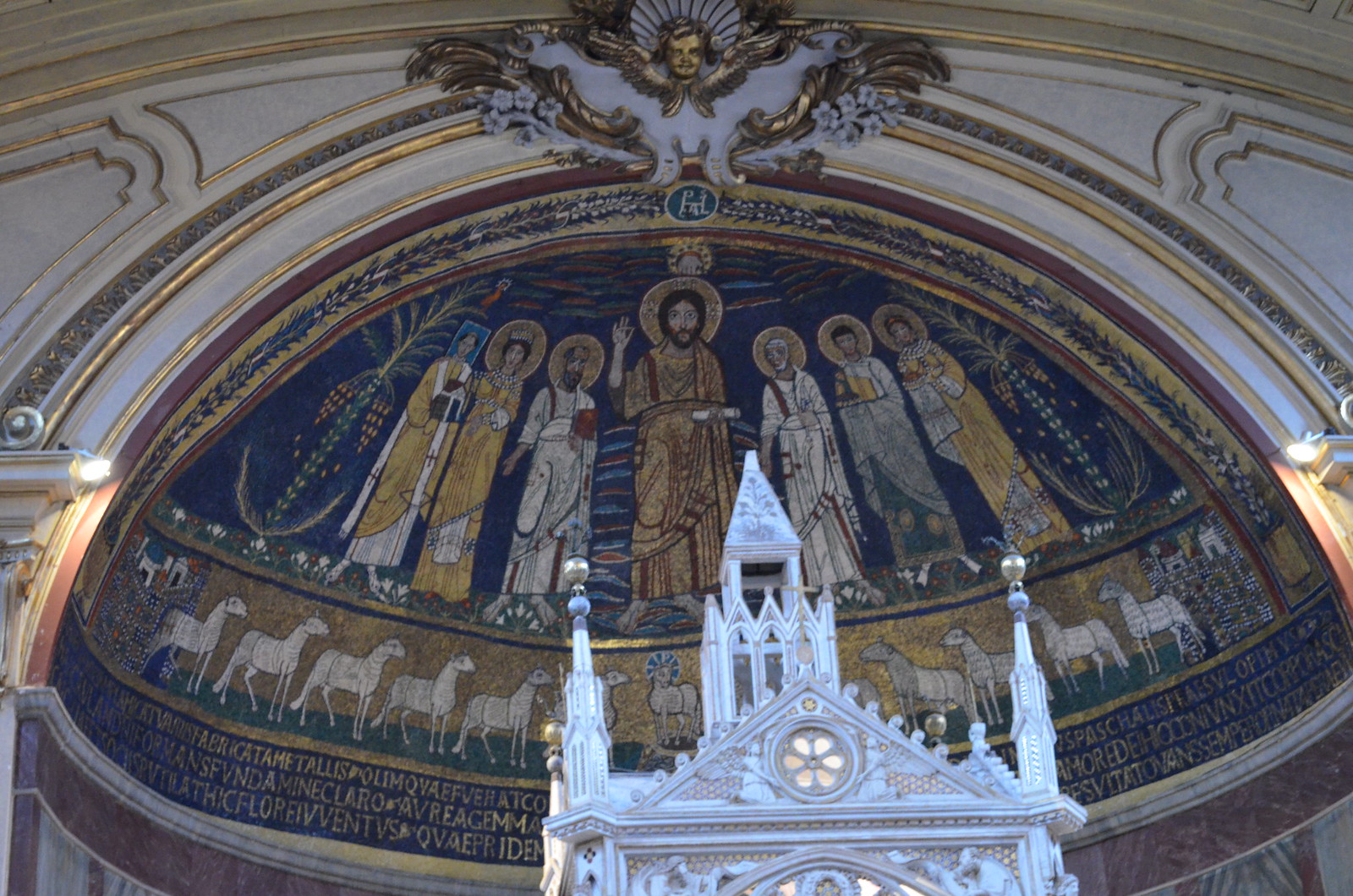 Some of the art adorning the walls was very Roman/Byzantine looking, with the mosaic used to avoid making graven images

According to everyone’s favorite infallible resource, wikipedia, the original church in this location was built over St. Cecilia’s house sometime around 329 AD, maybe about 100 years after she was executed. Pope Urban I may have been the one who built it. That said, I have NO idea how much of the original church remains. The church as it stands today has a facade that was put on in the 18th century, before the United States was the United States. The art styles range from Roman/Byzantine (probably pre-byzantine) mosaic to baroque sculpture (see above) and renaissance paintings. It’s pretty freaking beautiful. 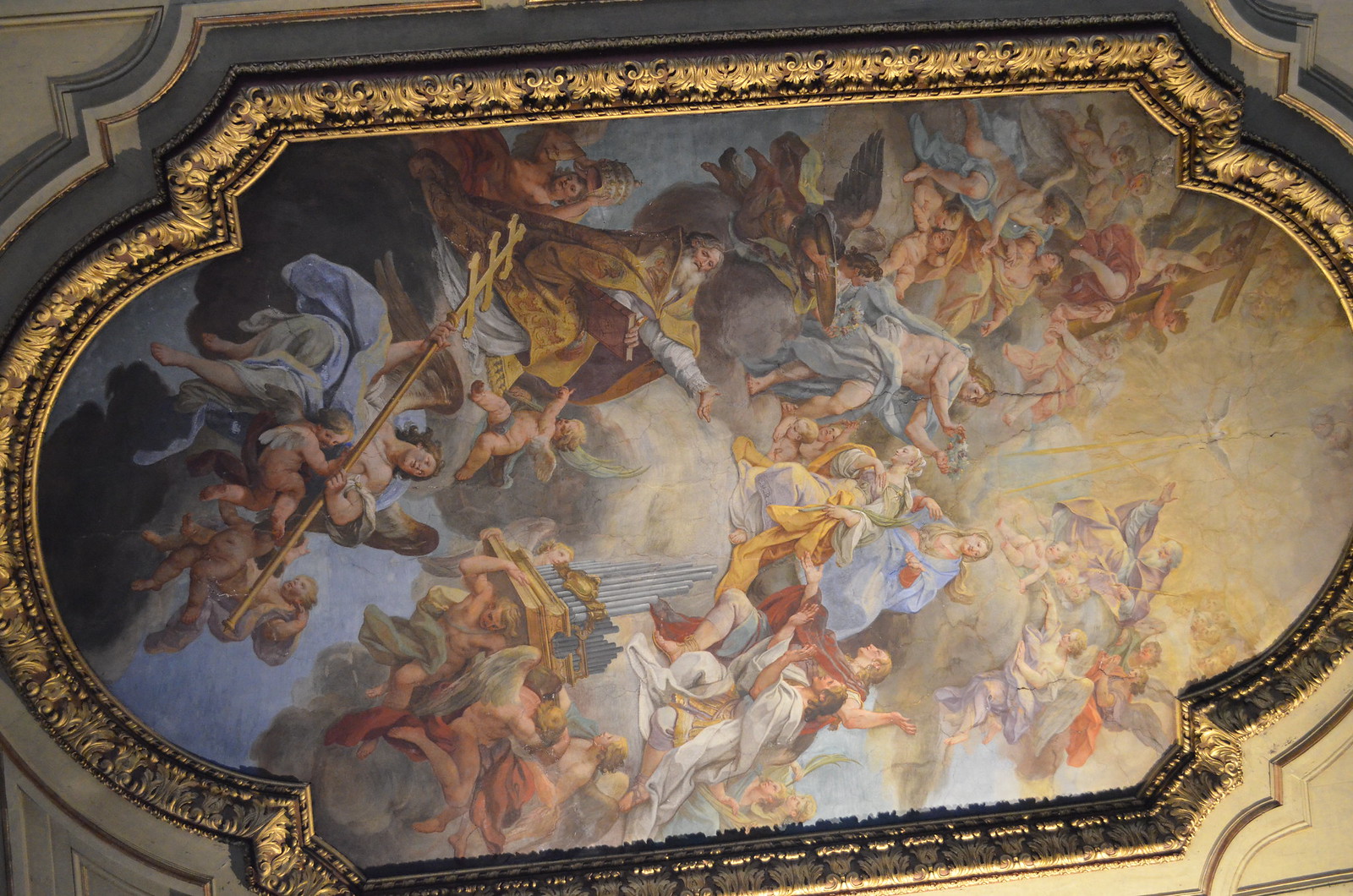 Fresco over the Nave

Of all of the smaller churches we visited in Rome, this one had one of the most ethereal naves with the ivory white walls and ceilings, and the frescoes and such. I also felt this church had a really nice vertical balance, with the beautiful art on the ceiling and the mysterious crypt visible through a grate in the floor. Between the open airway to the crypt and the effigy of St. Cecilia, you really got the feeling that she is still down there. 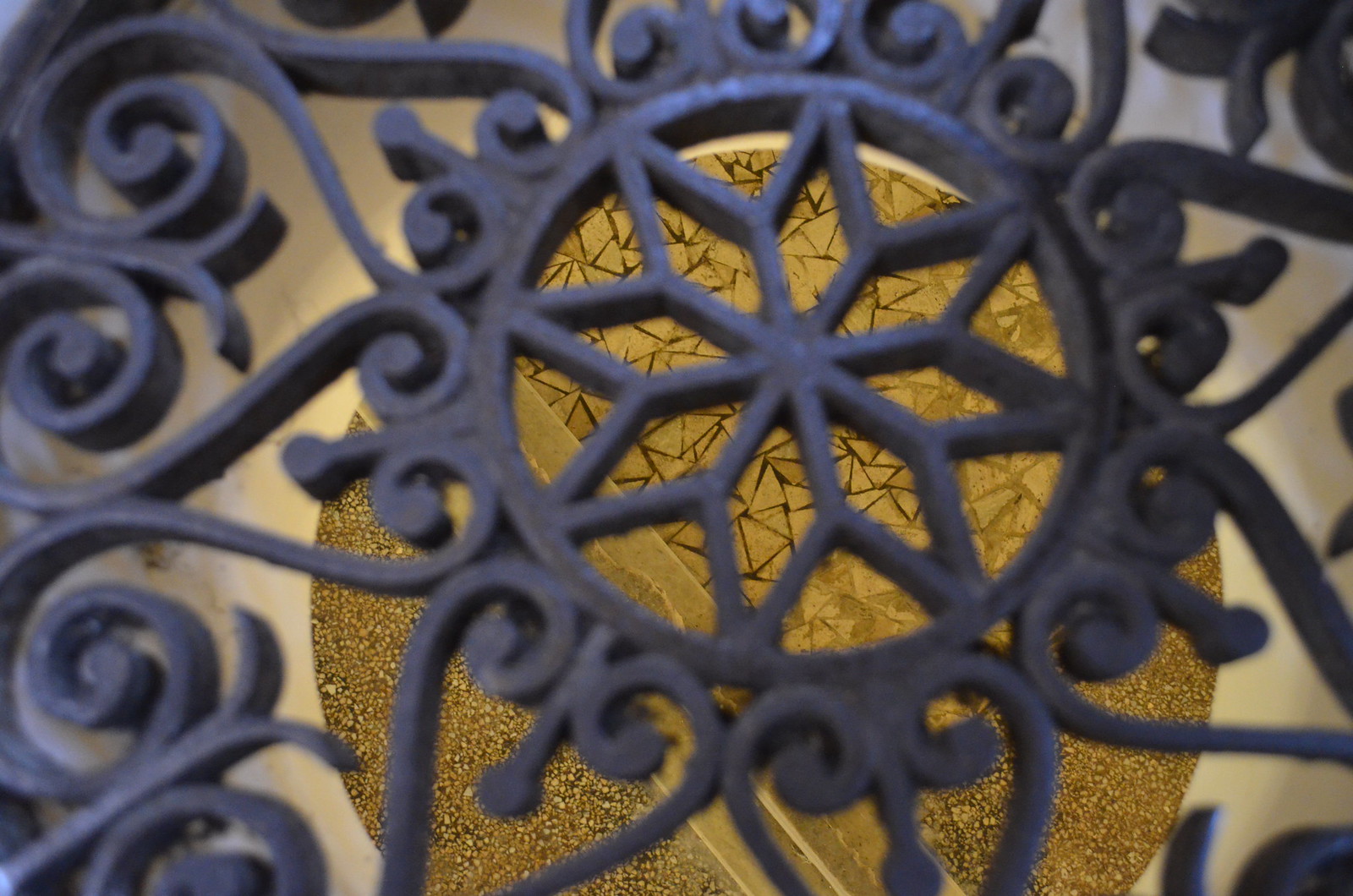 Looking into the Crypt of St. Cecilia in Trastevere

Given that it was only a donation of a couple of Euros to go down to the crypt ourselves, we totally did it. Of course, this being Rome and all, the crypt was also an archaeological site. I’m not sure our guidebook mentioned the thing about this church being built over St. Cecilia’s home. But someone definitely lived here during Roman times, so I’m just going to put 2+2 together here and put some misinformation online saying that this is St. Cecilia’s home because I want to say I’ve been to the home of a saint. Just kidding. I’m not going to say that, but it is a pretty cool thought. 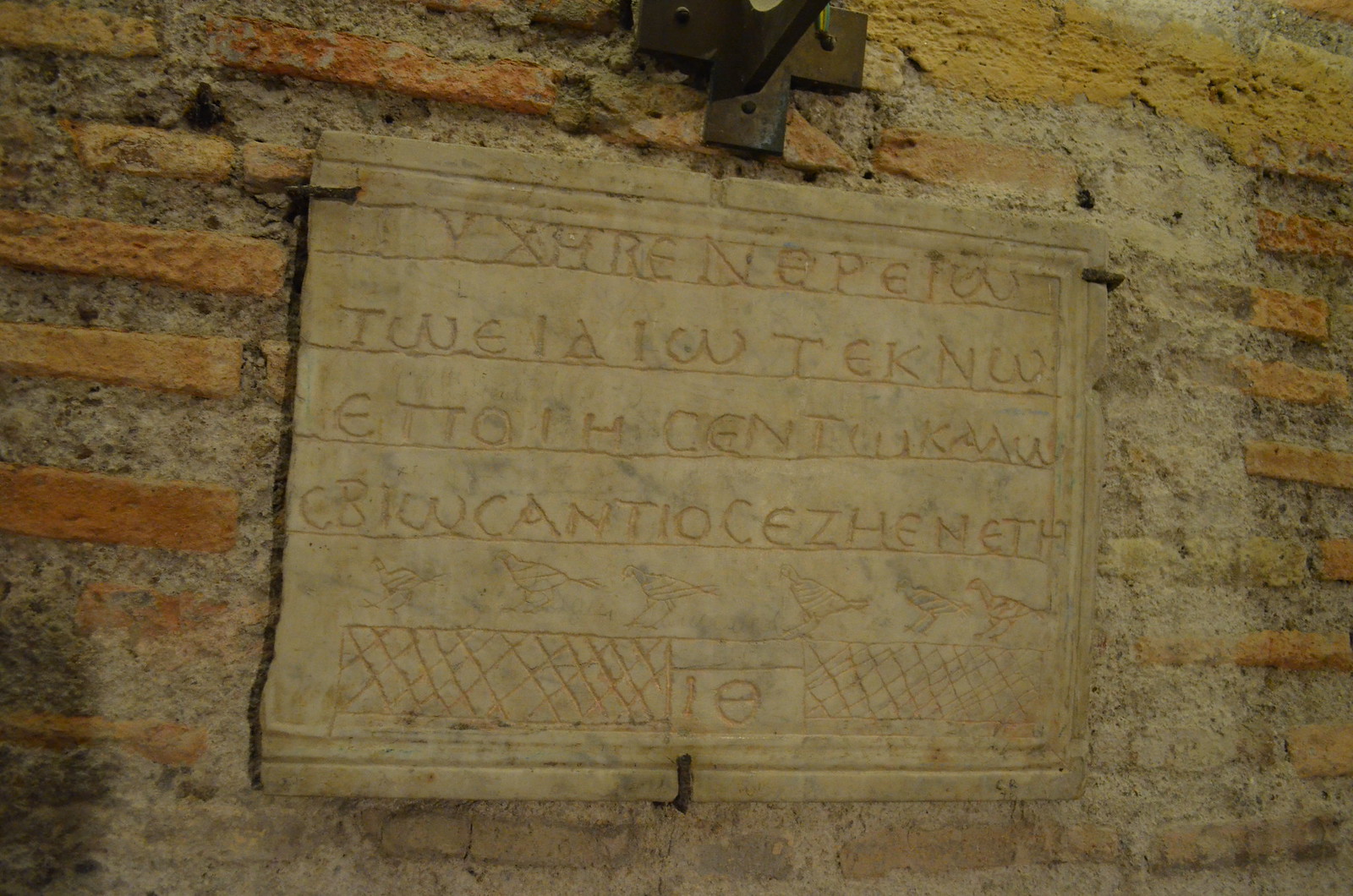 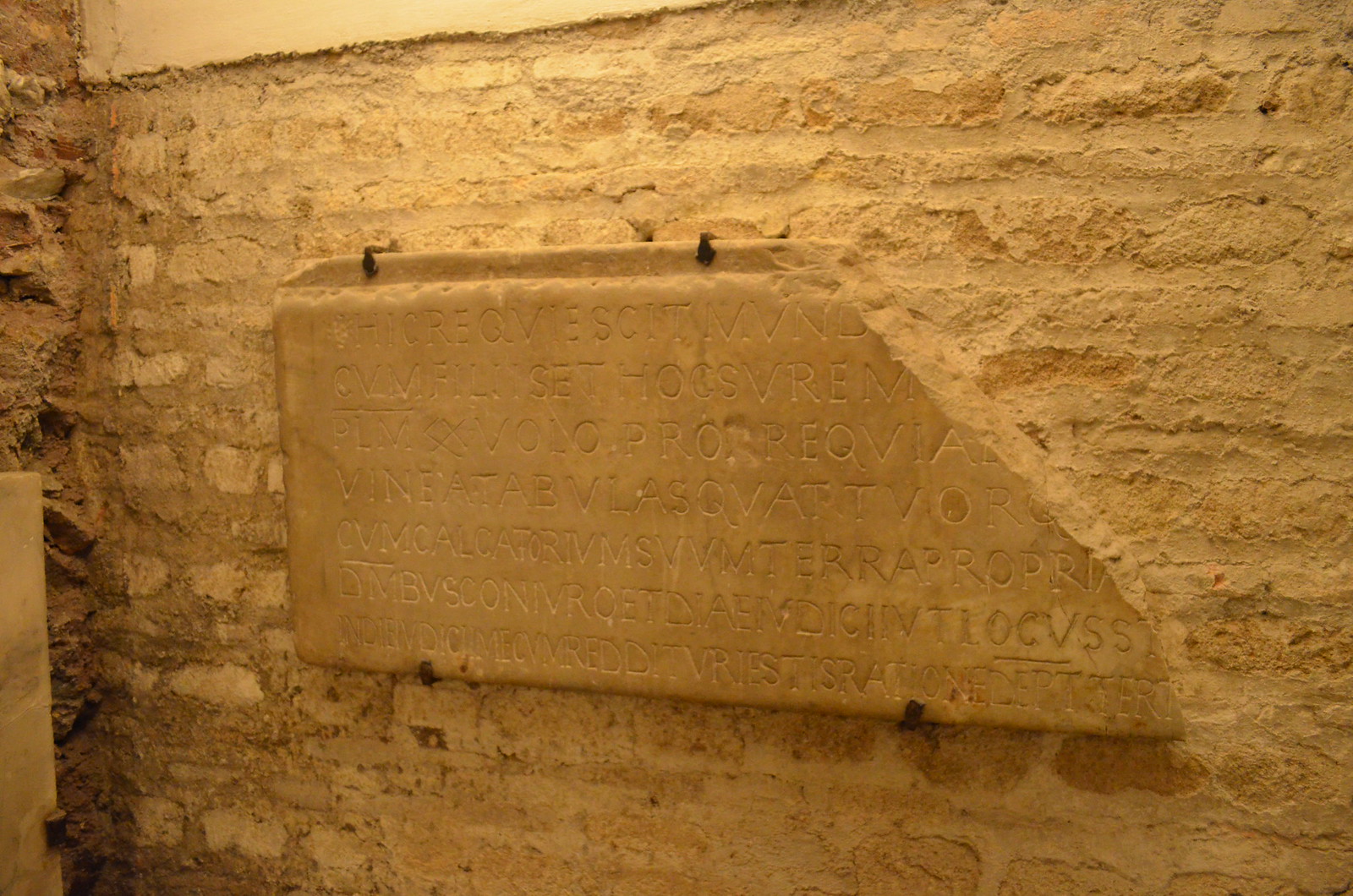 I’m not a Latin expert or anything, but I think their spacebar was broken. 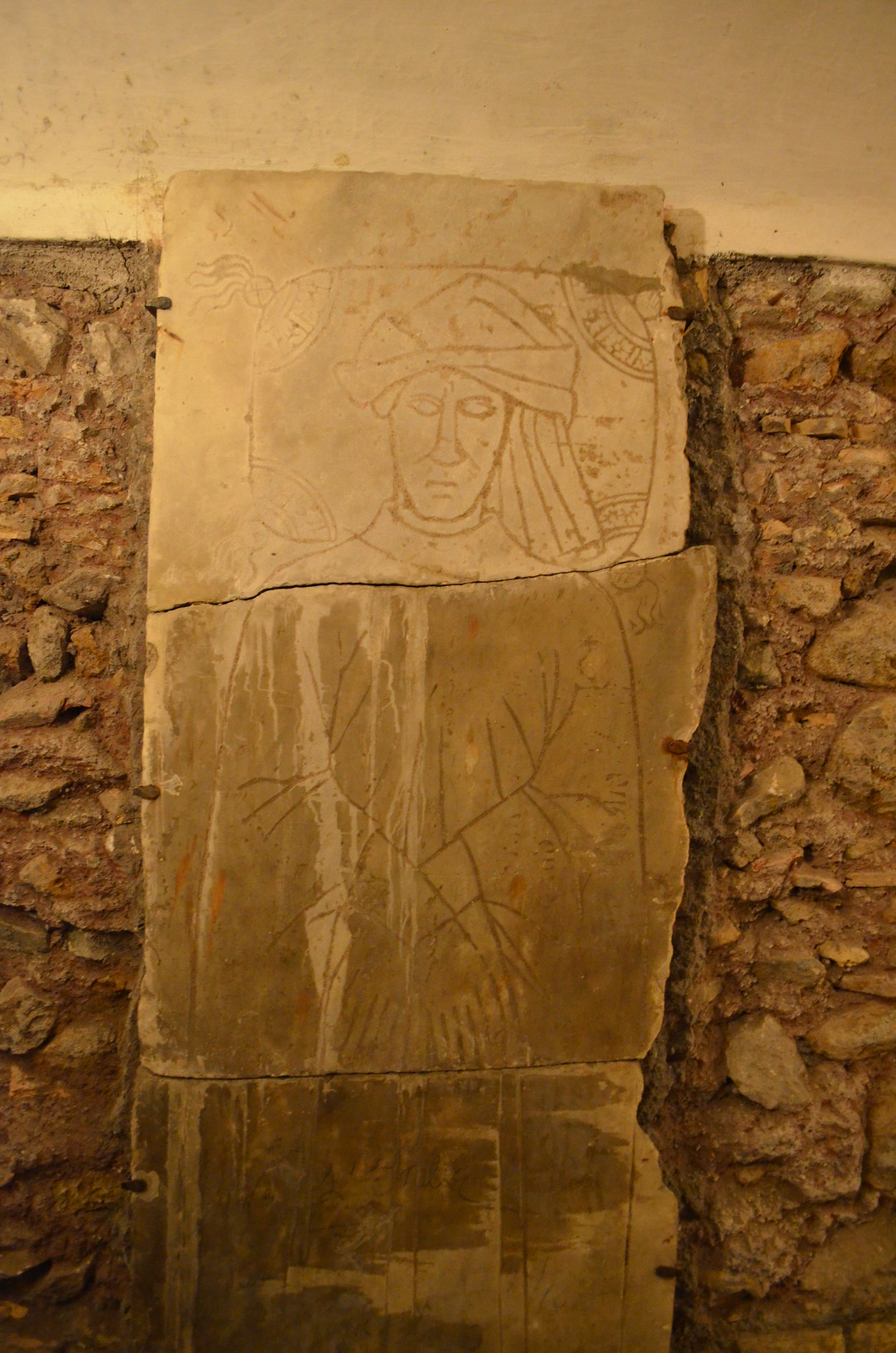 I’m not sure if this is a sarcophagus cover or what, but the look on his/her face definitely gives me the heebie-jeebies. 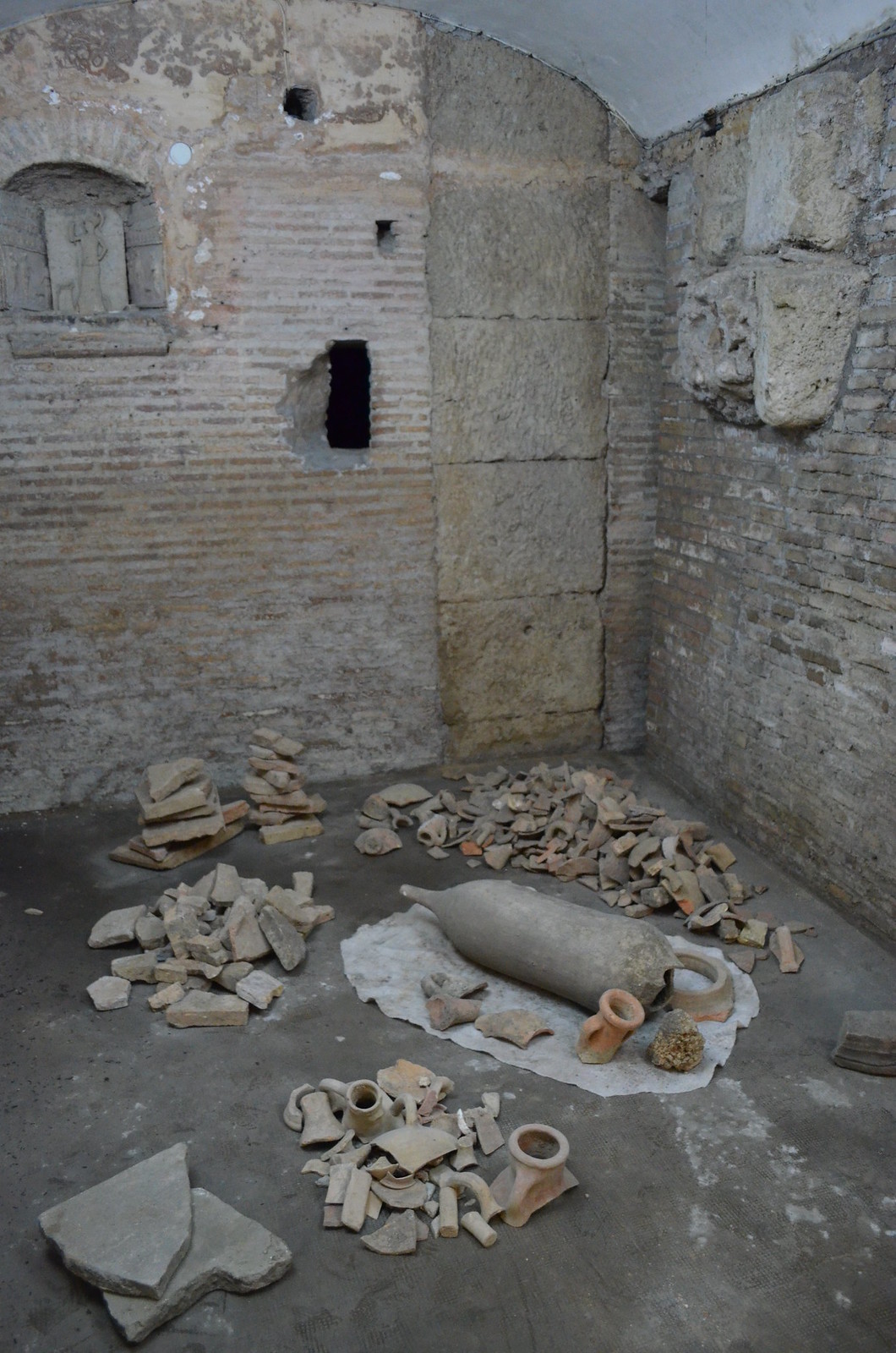 Someone lived here, and partied here.

Perhaps slightly disappointed that we didn’t get to see relics of Cecilia herself on a beautiful bed under a church draped with gossamer linens looking like an angel. But apparently there is a reliquary chapel that she’s been moved to somewhere on the surface level. We did enjoy every bit of our visit to St. Cecilia in Trastevere, though. Beautiful church in a beautiful city filled with beautiful churches. 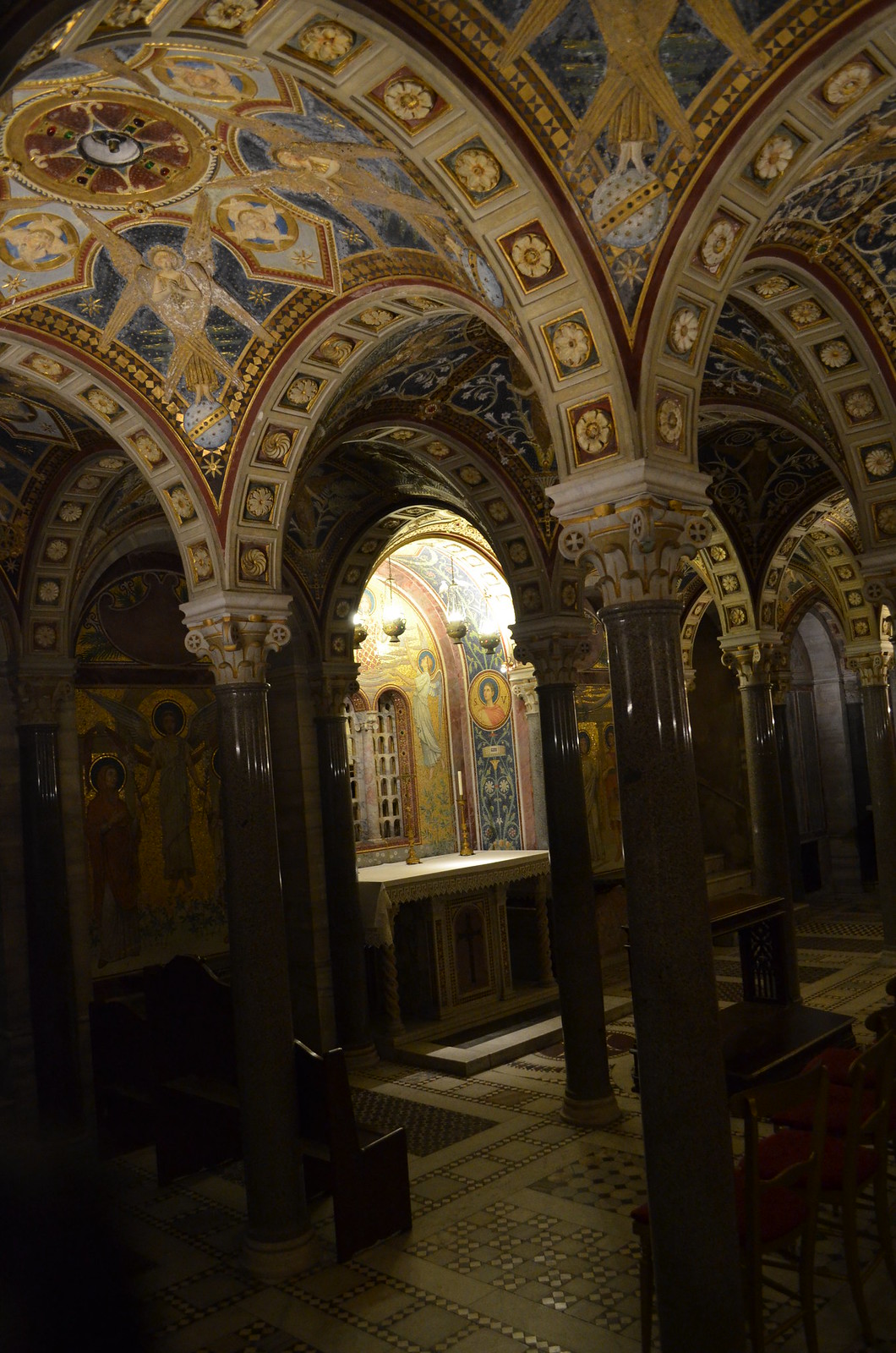 Now, I  think I need to go eat some cacio e pepe and drink a little wine, because all of the writing I’ve done about our tour of some of the ancient and beautiful places in Rome sure makes me wish I was in Italy right now. 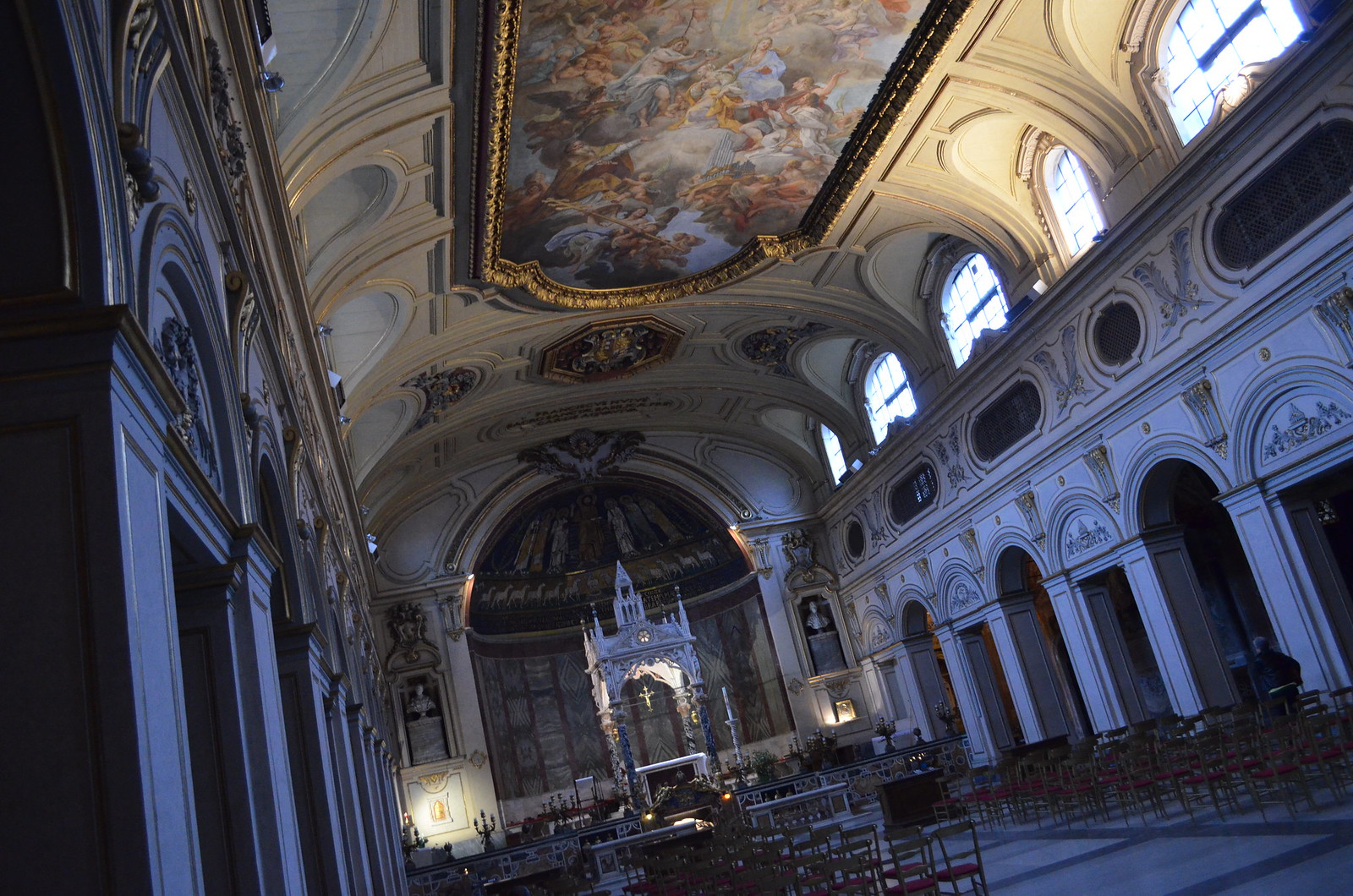 One thought on “Masterpieces of Light and Space: Church of St. Cecilia in Trastevere, Rome, Italy”